The NetEnt Slot Narcos has 5 reels with 243 ways-to-win.

Based on a true story, Narcos retells the story of the Colombian drug cartels of the 1980s and 1990s.

We have plenty of slots machines reviews based on TV Shows  Come and check them out!

A grim insight into the history of drug cartels

The slot journeys backwards in time to the 1980s, to look at the exciting history of Colombian drug cartels.

On the reels, you'll find the drug bosses fighting against the police and the DEA. You never quite know who is going to win.

The symbols include four high-value combinations of good guys and bad guys.

A pink flamingo and a small plane make up the medium-value symbols and finally the A, K, Q and J symbols for the low-value payments.

If you love this South American universe, go on an adventure with Gonzo's Quest Megaways slot machine from Red Tiger!

The police badge acts as the wild symbol in the game and it can appear in the main game and free spins.

It replaces all the other symbols except for the scatter symbol and the locked up symbols. If the wild symbol is involved in a winning combination, it will remain on the reels and move one space to the left after each game round. In new game rounds, other wild symbols can also appear that also walk to the left. It is possible to end up with several wilds at once, creating some great winning opportunities.

In the main game, the Drive-By Feature may be randomly triggered. In this feature, some randomly selected high-value symbols turn into wild symbols. 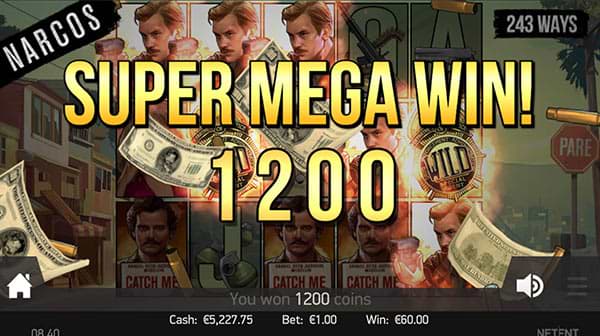 The slot boasts many special features, including free spins, a bonus game and wandering wild symbols.

The man holding a Catch-Me sign is the Locked Up symbol which triggers the Locked Up Feature with three or more on the same row during the main game.

The symbols then merge and there is a random coin win of between 1x and 10x the wager. During the feature all the spins are free and when a Golden Locked Up connects to a winning cluster then one of three features are unlocked.

These features can come in the form of multipliers of between x2 or x3, upgrade symbols in 1x total bet increments or a bigger starting value for the Locked Up symbol.

A car acts as the scatter symbol and can start the free spins when appearing on reels 1, 3 and 5. Here, there is a chance that high-value symbols turn into wild symbols.

What side are you on?

The slightly higher variance can make for higher wins, particularly when features are triggered.

The Narcos slot has a theoretical return to player of 96.23% and a medium to high variance. Since the game has several special features, you should play it for a while to give you a better chance of collecting a larger prize.

If you want to experience the exciting battle between Pablo Escobar, the cartels and the police, then you can play the slot at one of our recommended casinos.

And if that's not enough, come and try the magnificent Moon Temple slot from Lightning Box Games software!

Players who like Narcos also play at :
Technical details
Software