The game integrates a spicy Mexican theme with cartoon graphics and hot chillies on its reels.

We all know chillies release that adrenaline kick in our bodies. But will they be hot enough in this game to enable you to hit the maximum win? Continue reading this review as we unpack this slot's features.

Come and check out our other slots machines reviews here!

Firstly, the Willy's Hot Chillies slot packs up attractive bonus features to arouse your taste buds and spice up your gameplay. They include the Multiplier wilds and the Willy’s Hot Wheel, which is the main free spins feature.

Secondly, the cheerful Mexican theme offers a retro feel to the game.

The visuals are also outstanding and the cartoonish characters stand out perfectly amidst the desert background.

If you like this South American universe, go on an adventure with the Aztec Gold Megaways slot from iSoftBet!

This slot game comes with a 5-reel, 3-row and 20-payline layout.

You create a winning combination when you align three, four, or five identical symbols from the left to the right, starting from the first reel to the subsequent reels.

Before staking your money, you can try the free play demo available at many online casinos. 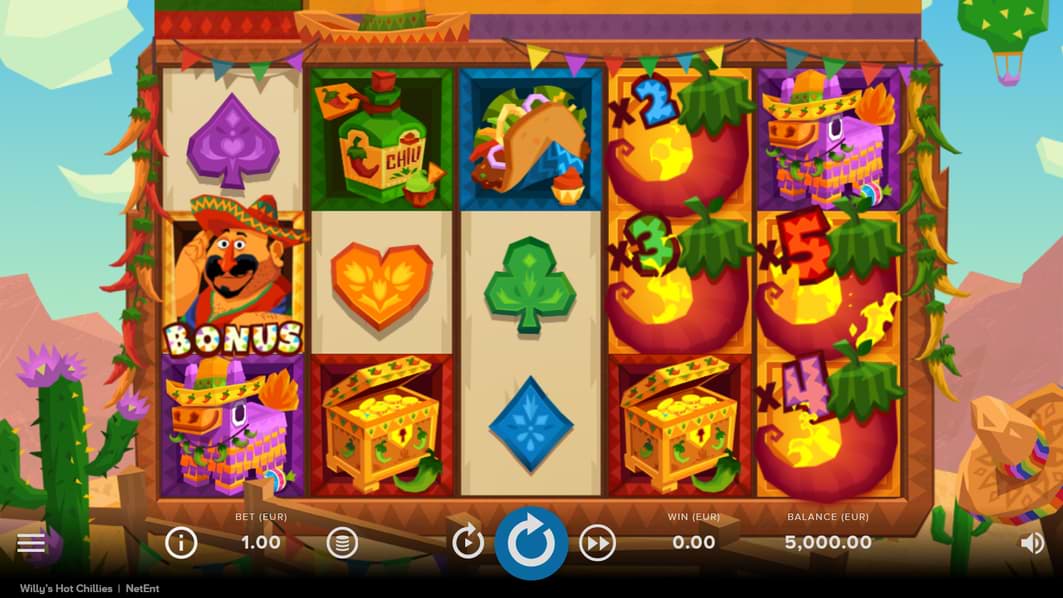 This makes it very enticing if you are a high roller. Willy’s Hot Chillies is of medium variance, meaning that you'll get fairly frequent small winnings.

However, bigger winnings will accrue from the Willy’s Hot Wheel bonus game, where the multipliers can award up to 2,000x your stake.

The slot incorporates a Mexican theme with vibrant 3D graphics. You will see a cactus, sombrero and different symbols on the reels.

During gameplay, you'll hear a contemporary Mariachi music track playing in the background.

The RTP stands at 96.0%, which is about the average for an online slot.

And if that's not enough, come and try the Party Parrot slot from Rival!

Being a medium variance slot, the frequent wins will be contributed to by payouts from the symbols.

The treasure chest is the most valuable symbol, with payouts of up to 3x for five in combination.

The chilli, which is the wild symbol, substitutes all symbols and comes with a multiplier of up to 5x.

Moreover, the slot is created with HTML5 technology, so you can actually enjoy it on your mobile device.

As with all other online casino slots, this game also integrates wild symbols. In this case, these are the chillies, which not only replace other symbols but also appear as multipliers on the reels.

The multiplier values range from 2x to 5x. If two or even more multiplier wilds show on a payline, the values are summed together.

This means that wilds with 3x and 5x multipliers will amount to a value of 8x.

Big Win with the Willy's Hot Wheel and Fire Pointer 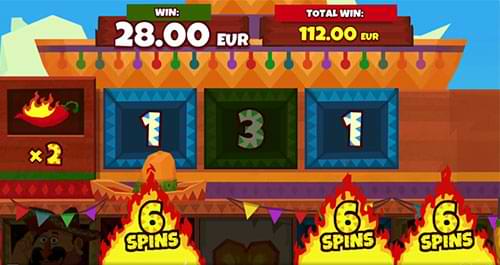 To trigger this feature, you’ll have to land one bonus symbol upon the first reel and some multiplier wilds on the rest of the reel set.

When this occurs, the full reel set changes into a Fire Pointer. The amount of spins you'll get is calculated by summing up all values of the multipliers on the Fire Pointer.

You will mostly start with a minimum of 6 free spins. 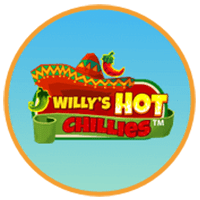 NetEnt is known for producing great games and the Willy's Hot Chillies slot is no exception.

The game is packed with attractive bonus features that will make you anticipate the next move.

It's all in the Willy's Hot Wheel extra feature, where you can be rewarded generous cash prizes plus free spins.

Furthermore, the Mexican theme will heat up the gameplay to the maximum as you sway along with its accompanying soundtrack.

However, the game lacks the potential of hitting the 2,000x maximum win. And though the bonus game initially looks promising, after several spins, it produces low returns.

Nevertheless, being of medium volatility, you can still get regular decent payouts in the 50x-100x range.

It will also keep you spinning for longer than you expected. If you like a thrilling game with some Mexican flavour, this is the one for you!