Sail away on the high seas for adventure in Quickspin’s Treasure Island where the opportunities to uncover prizes of up to €1,000 in this 5-reel and 40 fixed paylines slot are abound.

There are more online slots games to play here, with more new and exciting games being added all the time.

The setting is an island rife with hilltops, blue seas, jungle and of course treasure. The lower ranking symbols include the poker symbols with a map as their background. The payouts are poor with the maximum payouts slightly higher than your bet and lower during the free spins feature. The middle to higher paying symbols consist of five characters which include Jim Hawkins, Long John Silver and Captain Flint, with the treasure chest wild encompassing the highest paying one with a payout of up to 10x your wager during the base games and 5x your wager during the free spins. The other symbols have a rather lethargic maximum payout of 1.5x to 3x your bet which is even less attractive during the free spins feature. The music and sound effects compliment the theme of the game in the spirit of adventure from the splash of the tnt barrel as it hits the water to the exploding sound of the deck cannon. The compass symbol madly spins in the direction of the bonus leading you to prizes! 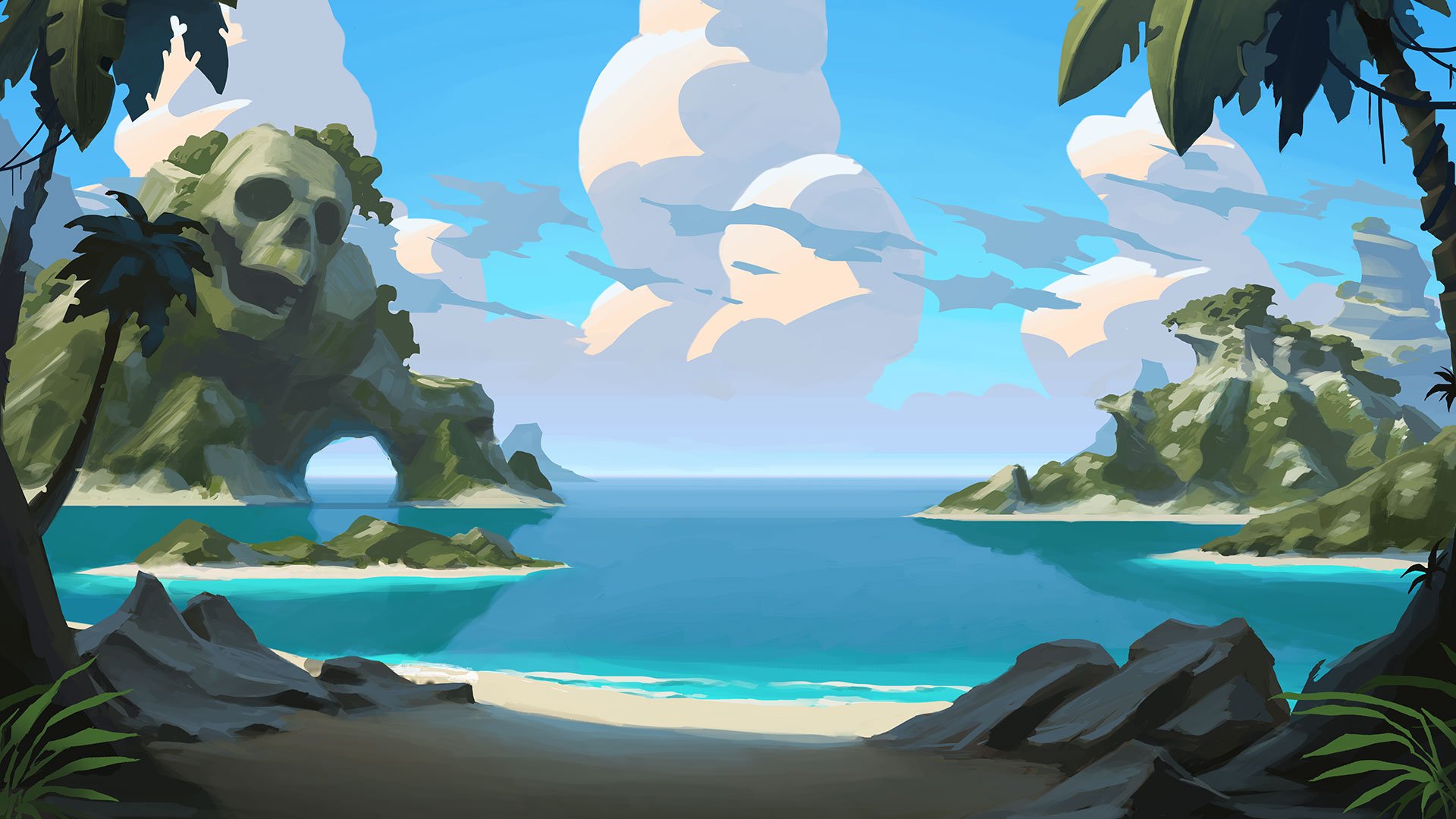 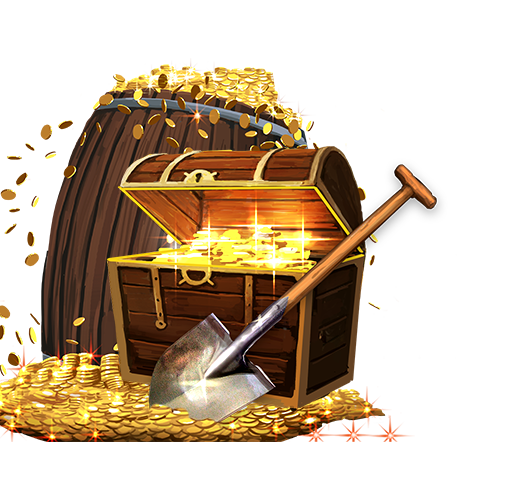 With a plethora of treasures to unlock, where to start is a tough question to answer. We will start with the stacked wild treasure symbol, which can appear on any reel and substitute for any symbol except the bonus scatter symbol and barrel wild symbol. The compass bonus scatter symbol unlocks the bonus pick feature where the appearance of three symbols awards you the chance at one of an instant win, free spins or the treasure hunt bonus.

Pirate attack on the high seas

The tnt barrel wild symbol appearing 2 or more times unlocks the pirate attack feature where a pirate ship shoots 2 or 3 cannonballs which land on the reels. If the cannonball hits the explosive tnt wild symbol, the resulting blast adds more wild symbols to the spaces. 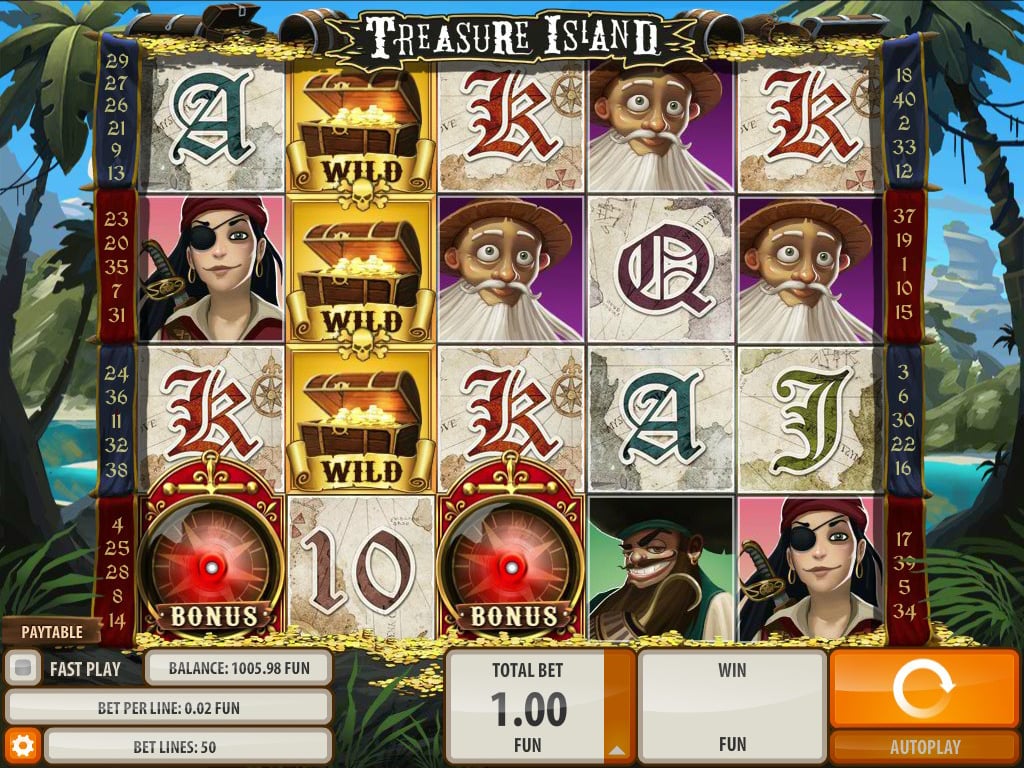 Triggered from the appearance of the bonus scatter pick, the number of free spins and awarded features here are determined in the island hop bonus game. Here you are presented with a number of islands where you select amongst islands to receive awards, which could include extra free spins, instant wins and extra features enabled during the free spins. These extra features could include extra wilds, super wilds and locked barrel explosions. The extra wilds come in the form of Jim Hawkins, Long John Silver and/or Captain Flint base symbols that have been transformed into wilds. The super wilds are added to the stacked wilds and the wilds from explosions in the pirate attack bonus are locked for the duration of the spins.

For extra riches, the treasure hunt feature can be triggered from the bonus scatter pick where you choose two places to dig out of five x’s on the map. Find the treasure spot on the map, which allows you to choose from three chests where you can win an especially big booty! 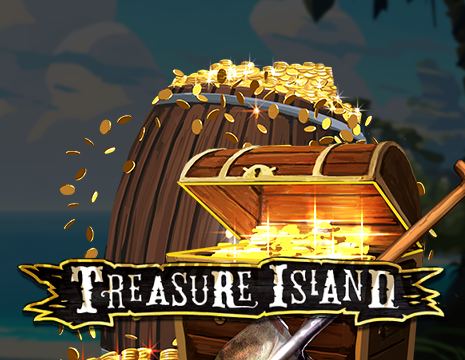 Treasure Island is a video slot that lets you gamble from total bets of between €0.50 and €100 per spin with a theoretical return to player (RTP) of 97.07% The game offers a treasure trove of features and some entertaining graphics and sounds. The payline prizes during the base games are a tad underwhelming and top out at 10x your bet and oddly enough these are even lower during the free spins feature at up to 5x. To make it worth your while, you will need to rely on multiple payline wins during the base and free spins games which is not impossible given 40 paylines. If pirate themes are to your liking and let’s face it they don’t get more exciting than that, why not give this game a try?

If you want a fun and exciting game with lots of possibilities, Royal Frog is perfect for you.