If you’re ready to play Temple of Nudges from Netent, you’ll need to leave civilization behind. That’s because this temple is far away from any human civilization, set deep within the remote jungles. There is nothing for hundreds of miles except green jungle and in the centre of all this is an erect temple.

The adventure begins on this 5-reels and 243 bet ways slot with the help of the Nudge Feature and Re-spins for the ultimate goal of digging up 21,870 coins.

We have plenty of slots machines! Come and check them out!

The symbols are divided into four high value and four low value symbols.

The first four symbols are different coloured carvings of native wildlife while the low-value symbols look like simple hieroglyphs.

In terms of artwork, this is probably not the best slot by this developer who has produced some of the most impressive graphics on the market. Still, this slot has an adventurous theme that is supported by spiritual music, heavy with the sound of drumbeats and air instruments.

In addition to the random sounds of nature, winnings will also trigger its own set of exciting audio effects.

If you like this South American universe, go on an adventure with the Gonzo's Quest Megaways slot from Red Tiger!

The Nudge Feature is unlocked on any winning combination.

First, the win from the spin is calculated, and the reels will be nudged down by one position if another winning combination can be made.

The win is then evaluated again. The feature remains active as long as winning combinations remain present on the reels.

During a winning round, a re-spin overlaying symbol may appear to kick off the Re-spin Feature. Here, identical symbols remain sticky while the residual symbols re-spin.

The feature is hard to trigger, but not impossible so you’ll need to be a little patient. 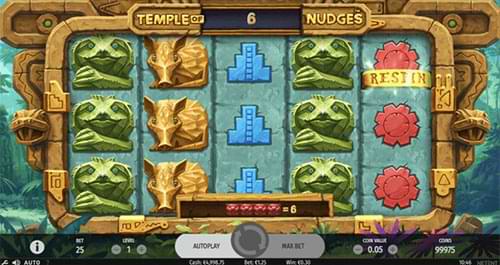 And if that's not enough, come and try the Temple Tumble slot from Relax Gaming! 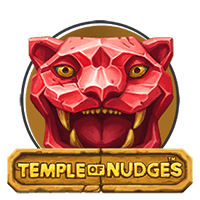 Temple of Nudges slot has an RTP of 96.03% which is about right for a Netent slot.

Furthermore, the slot is designed in HTML5 and can be played on mobile, tablet and desktop. An Android or iOS device will suffice if you choose to play it while you’re on the go.

If you’re ready to go searching for the promise of gold, then head to one of our recommended casinos today.

Players who like Temple of Nudges also play at :
Technical details
Softwares