Tales of Dr. Dolittle is a 5-reels and 25 fixed paylines slot from Quickspin.

Tales of Dr Dolittle is a Quickspin adaptation from a series of children’s books, the earliest of which dates back to 1920. The plot focuses on the character of a medical doctor who begins treating animals, instead of humans, and learns to speak in their languages.

A film was released in 1998, starring comedian Eddie Murphy as the animal whisperer, which proved to be a box office success.

The popularity of the story has become the inspiration that led to this 5-reels and 25 fixed paylines creation. 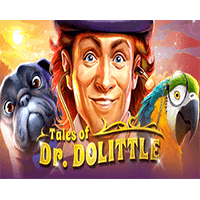 The slot remains faithful to the books and comprises several amusing creatures as the upper-value symbols that include a dog, horse and a parrot.

Dr Dolittle remains the highest – paying and there are royal flush poker symbols making up the lower-value end.

The soundtrack is full of energy and intensity and goes well with the beauty of the artwork.

Listed amongst the features are the 10 free spins, triggered by 3 scatter symbols. The feature is enhanced by a wild multiplier which will grow your cash when it takes part in a winning payline.

The theme is based on an endearing series of children’s novels. 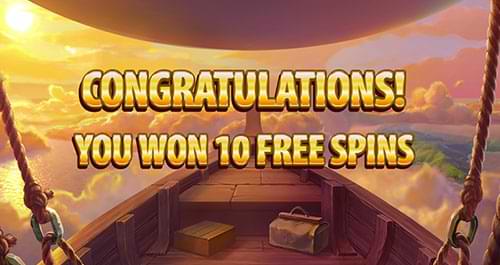 The Respin Feature is an interesting game sweetener that is triggered on any payline win. In this scenario, the winning symbols are locked in position while the remaining symbols take part in a respin.

If more of the same winning symbols appear as a result, then they too lock into position for a respin and this continues until no new symbols are added.

At this point, the feature ends and your final winnings are calculated.

Looking for more games based on movies, TV shows or books? Tarzan from Microgaming is the slot for you!

The wild symbol has the ability to substitute for any of the other symbols with the exception of the scatter. Combinations of wilds on a winning payline have the ability to act as multipliers to grow your winnings above and beyond the paytable amounts.

This means that if you are fortunate enough to land a winning payline with 1, 2, 3 or 4+ wilds, then an x2, x3, x4 or x5 multiplier is applied to that payline respectively. 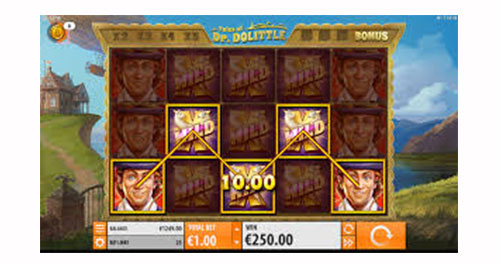 Tales of Dr Dolittle slot has an RTP of 96.72% and medium volatility so wins might happen a little less on average but be bigger when they do.

You will be able to vary the bet size from as little as €0.25 to as much as €125 depending on your strategy, budget and comfort level.

Looking for more games based on movies, TV shows or books? Ivan and the Immortal King from QuickSpin is the slot for you!

Designed by Quickspin, you can be guaranteed that the slot is available for play on a tablet, mobile and desktop.

Take it with you when you’re on the go with an Android or iOS device.

This April 2019 release is available in a number of our recommended casinos.

Players who like Tales of Dr. Dolittle also play at :
Technical details
Softwares