Microgaming presents a slot game which it claims is ground breaking by incorporating real-time 3D rendering into character animation as part of its story-driven design. Astro Legends: Lyra and Erion packs sticky respins and a bonus game, each of which creates an opportunity for big wins of up to 15,000x total bet!

The space techno pop story is based on two larger-than-life and out-of-this world characters: Lyra and Erion. Conventional reels have been replaced by a pentagonal-diamond like grid consisting of 20 spaces and wins are based on a cluster-pays formation rather than on paylines which is accentuated with an adaptive soundtrack. Five or more symbols horizontally or vertically adjacent form a win. The developer draws subtle parallels to the very popular Starburst from Netent. Symbols are originally designed and include three upper-end crystal symbols: garnet, amethyst and peridot. The lower-end consists of A, K and Q. 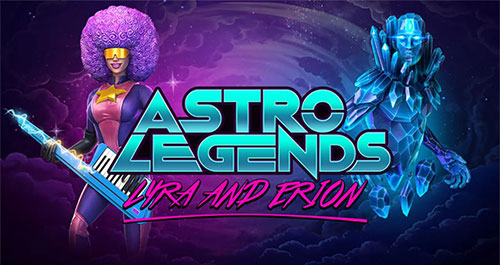 On each spin there is a 1 in 5 chance of randomly triggering the respin feature. Here, winning symbols are frozen in place on an alternate reel containing only the locked symbol or a blank space. The respins continue provided that additional symbols appear that are also locked in place. Only when the feature ends will your win be calculated. 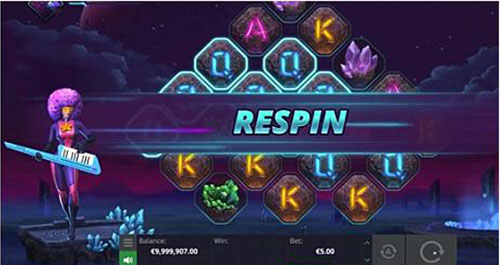 As part of the Stardust Collection feature, a bubble can randomly appear to overlay a symbol. Lyra will burst the bubble awarding anywhere from 2 to 10 coins. Collect 100 or more to trigger the Lyra Spirit Bonus where she turns into a wolf who you get to control.

The wolf has 3 lives when the bonus begins. There are 7 bonus levels where you must choose a path from three presented to collect gems while trying to avoid being hit by Erion. He’ll hit one of the three paths on the 1st to 3rd level and two of the three paths on the 4th to 7th levels. Get hit by Erion and lose a life. The feature ends only when you complete all 7 levels or get hit by Erion three times. Collect a x20 multiplier on your total bet by completing your objective.

The multiplier wild appears in 3 red hexagonal cells and could substitute for any symbol. In the formation of a winning payline, a multiplier from x2 to x5 is applied and can be combined if there is more than one on a payline.

Astro Legends: Lyra and Erion slot is available in HTML5 and has a minimum and maximum bet of 10 and 10,000 coins. It has an RTP of 96.63% with a medium to high volatility. With a November 2018 release, this slot may just set the new benchmark for slots games and you get to sample it simply by visiting one of our highly recommended casinos.