The exploits of the infamous criminals Bonnie and Clyde have been mentioned so many times that they have become legendary.

During the Depression of the 1930s, they were part of a criminal gang who robbed banks, stores and gas stations, and were known to kill when backed into a corner or challenged.

Looking for more games based on movies or TV series? Fairytale Legends: Red Riding Hood from NetEnt is the slot for you!

The artwork for the slot is as much as part of the story, which takes place across the central U.S, as is the colourful theme.

The graphics are impeccable and include a bank and a black V8 Ford Fordor Deluxe, at the higher-paying end.

The medium-paying symbols include a sub-machine gun, stacks of banknotes and a handgun.

Finally, the lower-paying symbols consist of four poker-suit icons. The slot gets much of the inspiration for its artwork from historical pictures of the two who became infamous during the deepest economic hardship of the 20th century.

The slot features a wild symbol that can substitute for any of the upper, medium or lower-paying symbols. 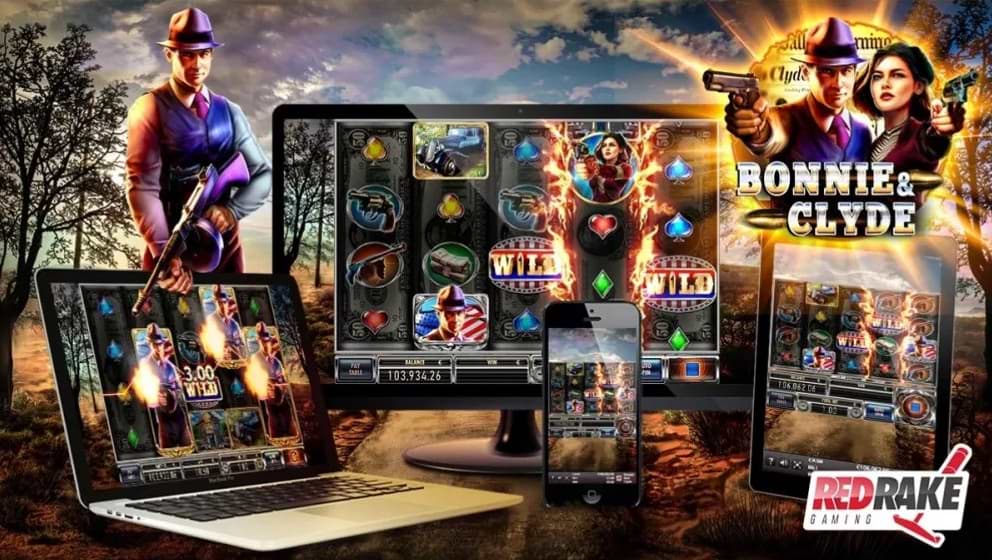 If you like movies or TV series, there is The Mask slot by NexGen Gaming available

Three or more Clyde symbols on a payline from left to right or right to left will reward cash. He may appear as a partially or fully expanded symbol.

Crime spree of the century

The return to player (RTP) of Bonnie & Clyde is 95.1% and the slot has medium volatility so wins will come less often but there is a chance of larger sums when they do.

It is designed in HTML5 and is available on desktop, mobile and tablet. This means that you can take the slot with you to your favourite coffee shop, or anywhere with a wifi connection for that matter.

It just so happens that we have a selection of casinos that offer this game so follow our links to get you started.

Players who like Bonnie and Clyde also play at :
Technical details
Softwares