Triple Edge Studios and Microgaming have joined forces to bring the Tomb Raider game to the world of video slots. Lara Croft Temples and Tombs is the 5-reels and 243 ways to win slot where the Tomb of the Golden Scarab Jackpot, guarded by Set and Sobek, holds 5,000x total bet!

There are more online slots games to play here, with more new and exciting games being added all the time.

The very beautiful and resourceful Lara Croft has sought to unlock the hidden temple treasures, home to the secrets of Golden Scarab Jackpot. She's back and she's got a taste for gold in this latest adventure! The highest-paying symbols are four poses of the action-packed Lara Croft. Two medium-paying symbols include statues of the gods Sobek and Set followed by a flaming torch, grappling hook, travel pack and water canister. The music teleports the player into the world of Lara Croft as she finds herself in Ancient Egypt.

A scarab carving acts as a wild symbol that replaces the other symbols. It surfaces on the second, third and fourth reels.

The Rolling Reels feature is trademarked by Microgaming and is available in both the main game and free spins. The feature replaces winning symbols with new random symbols which cascade into place. This creates an opportunity to create new wins, multiple times, wager-free.

The branded slot offers a chance to collect up to 5,000x total bet. 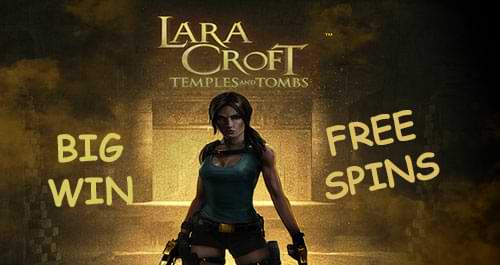 A book acts as a scatter symbol that will trigger 8 free spins when appearing in sets of three. During the Rolling Reels in the free spins, the first, second and third+ consecutive roll take the multiplier from 3x to 6x, 9x or 15x. This feature can be re-triggered while it's active.

While the Rolling Reels Feature is active, wild symbols are collected on each spin. The greater the number of wilds collected, the greater the chance of unlocking one of the three jackpots: Grand, Major or Minor. The jackpots give players the chance to win up to 5,000x, 100x or 15x their total bet!

This slot will probably attract a certain type of fan. That is - fans of the Tomb Raider video games & movies, medium volatility, ancient Egyptian themed video slots. The game is equipped with solid graphics and sound effects and overall I enjoyed the 243 ways to win construct. While the maximum payout is 5,000x total wager, you'll have to trigger the jackpot to do this which is very difficult so the payouts will likely be far less. For higher volatility, ancient Egyptian themes I prefer the classic Book of Ra from Novomatic or Book of Dead from Play'N Go. 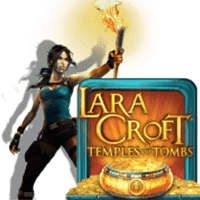 Lara Croft Temples and Tombs slot is a medium volatility game which is appropriate for players with a middle of the road risk appetite. It has an RTP of 96.05% and can be played with a range of wagers which begin at £0.20 and goes as high as £60. It has been designed in HTML5, so it's optimised for desktop, Android and iOS.

If you want a fun and exciting game with lots of possibilities, Mega Moolah is perfect for you.