It’s been four years since Play’N Go released the Rich Wild and The Book of Dead game.

We decided to celebrate the anniversary of this classic jackpot slot with an updated review and a little background information to find out how and why this high-volatility slot with a classic setup of five-reel and ten pay lines became a staple and set a new standard for ancient Egypt-themed slot games.

You can play a Book of Dead demo by clicking the Play Demo Mode button on this page.

So, without further ado, let’s follow famous Egyptologist Rich Wilde down the mummy-hole and explore the history behind the magic!

If you are looking for more information about online slots machines games, you can read our helpful review online.

Once upon a time, there was the Book of Ra, a land-based slot by Novomatic that was the most popular offline and online slot in Germany.

But not because people stopped loving it. Rather, Novomatic stopped offering its catalogue in Germany in order to comply with the country’s online gambling regulations. This meant there was a huge demand from three generations of players for a high-volatility jackpot slot that would take them back to ancient Egypt through the screens of their mobile devices.

Suddenly, every major developer was out to create their own Book of Ra clone to cater to fans who could no longer explore the ancient ruins.

And that’s when Richard Wilde showed up and stole our hearts. Suddenly, it wasn’t just Germany —players across the UK, the US and every European country flocked to the iconic burial chamber to take part in the hunt for the Book of Dead.

And we think we know why. 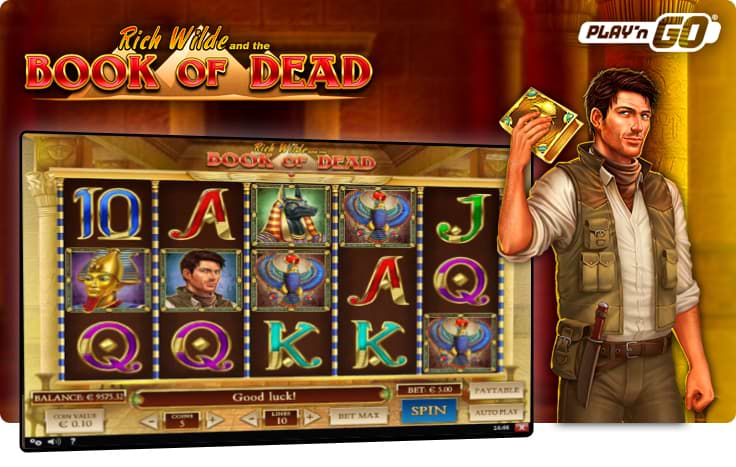 ? Play for real at PlayFrank

Every slot game with a theme needs a storyline. Period.

And Book of Dead had one that was hard to beat. We follow Rich Wilde on his quest to find the Egyptian Book of The Dead, which leads him into a mysterious Egyptian temple, where he comes face to face with the gods Anubis and Osiris.

The Book of The Dead was the ancient Egyptian manual that contained the necessary spells to guide the spirits of the dead through the Duat (underworld) and into the afterlife.

The temple is beautifully designed down to the smallest detail. The temple walls are built from textured limestone blocks, just like the pyramids. And the columns have beautiful carvings that come alive under the subtle lighting that creates a smooth contrast between the light of the desert sun and the entrance to the depths of the mysterious temple.

Even the music is in tune with the sense of mystery and high stakes.

The symbols are exquisite, with the 10-A stylised in ancient Egyptian design. Then there are the high paying symbols, from the Hawk to Rich Wilde himself: 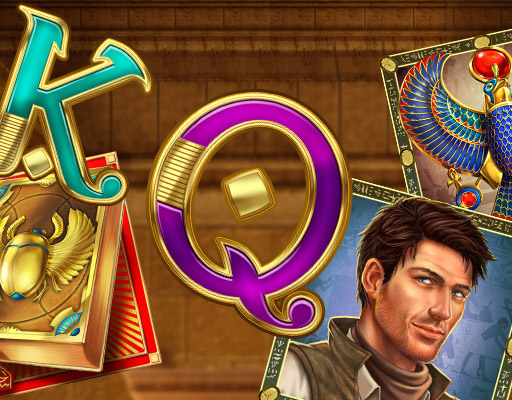 The Book symbol acts as the scatter, triggering the free spin sequence that can keep the slots spinning until you reach the maximum prize.

The original Book of Dead experience is so good, that we just can’t seem to get enough of it. The extremely smooth spin of the slots, and their sharp and precise landings, have just the right speed and action befitting their high volatility.

With an RTP of 96.21%, Book of Dead adds to the high expectations created by its high volatility and its progressive jackpot.

Then there’s the free spin mode triggered by the scatter symbol. This wildly animated sequence moves you through different stages that each yield chances at even bigger wins.

The randomly chosen expanding symbol will cover an entire reel, increasing your chances of winning.

The card flip gamble feature adds an extra layer of excitement to every win. Not to mention that it’s a great way to make sure that the action never gets boring.

Every time you win, you have a chance to play for double-or-nothing by guessing the colour or the suit of a card. The game keeps going for up to five wins, yielding 2500 coins. But be careful! Losing will also see your winnings blown away like so much desert sand in the wind.

? Play for real at PlayFrank

There are countless video slots that seek to fill the void left by Book of Ra wherever this casino game is unavailable.

We’ve come up with a list of the top Book of Ra clones, which we’ll be reviewing and featuring to play in demo mode.

Make sure to check back in to see the updated list!

Crazy Cows is a great online slot game that we recommend!

feedback FAQ about Book of Dead

Players who like Book of Dead also play at :
Technical details
Softwares