Sahara Nights is a 20 paylines slot from Yggdrasil offering up to 3,500x total bet.

Yggdrasil invites you to make a wish in the Aladdin-themed Sahara Nights. This slot, inspired by one of the stories of the Thousand and One Nights, is a 5x3 slot with 20 paylines and maximum payouts of 3,500x total bet.

Thousand and One Nights 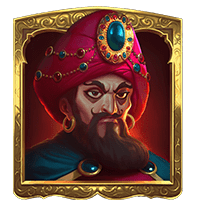 By the pale moonlight, the Persian Kingdom is full of enchantment and mystery. The highest-paying symbols start with the Sultan, who is a super pay symbol. He pays up to 7x more than the next highest symbol, which is his wife. He is also the only symbol that can shape a winning payline with as little as two.

These characters hail from the story of One Thousand and One Nights about the tale of a Sultan who murders his wife after learning of her infidelity. In a fit of grief, he proceeds to marry a different virgin every night and kill her the next morning after deciding all women are unfaithful. He would marry the cunning Scheherazade who would tell him a different tale each night but never conclude it until the following night when she would start a new one. The curious Sultan would be forced to delay her execution each night, waiting to find out how the story would end.

The third-highest paying symbol is the character of Aladdin. There are two middle-paying symbols including a dagger + peacock feather and a goblet + pearl necklace. The lowest-paying symbols are four gems: red, blue, green and orange. The soundtrack beautifully combines stringed instruments, woodwind, percussion and brass with dazzling results. The sound effects arising from the features and winning rounds are no less impressive. 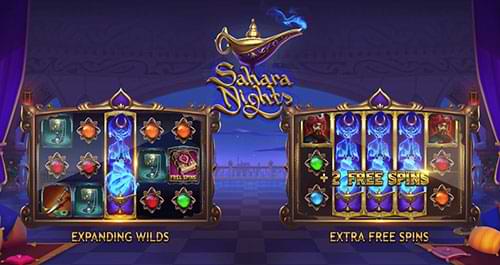 A magic lamp can appear on the second, third and fourth reels. It will expand if it can create a win, with a Genie who pops out to cover the entire reel. The wild substitutes for any symbol except the scatter.

Sahara Nights slot seemed a bit of a wasted opportunity. While the artwork and soundtrack are top-notch, the slot suffers from two shortfalls. The first is a shortage of features. I did like the expanding wild, scatter wins and free spins although I did find the latter difficult to trigger. However, I did feel that a bonus feature in support of the underlying story would have made the game more engaging. My second observation was that it was tough to collect a decent payout even after hundreds of rounds. I never did manage to reach 25x total bet on any spin.

My opinion would be to look elsewhere if you are interested in a medium volatility slot. 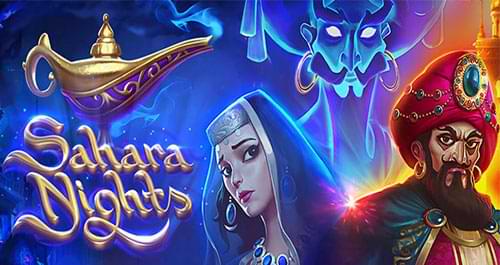 Sahara Nights slot has an RTP of around 96.2%, and you can play with bets starting from £0.10 to £100. The game is available on several platforms including desktop, mobile and tablet. Take the game with you using an Android or iOS device. The game is a medium volatility slot, so wins may be a little bit harder to come by but a little higher when they do. If you're ready to get started, then visit one of our recommended casinos today. 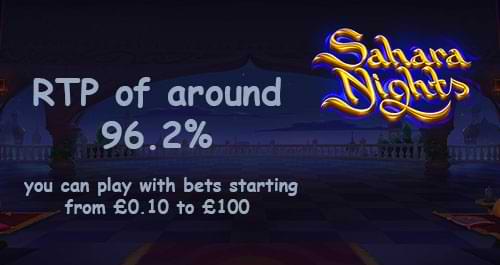