Prepare for an extra-terrestrial encounter as Play'n Go presents this next game called Reactoonz. This is a cluster-pays slot played with a 7x7 grid and a maximum payout of 75,000 coins on a spin!

If you're looking for an online slots machines game, this is the perfect place. 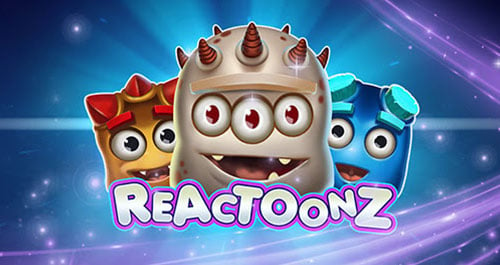 This is an alien-themed game designed in an amusing cartoon style. The regular symbols are made up of eight geometrically shaped alien symbols that are animated, and where you might even catch them blinking or bouncing. While the symbols are relatively simple, they represent a nonetheless entertaining assortment of amusing cartoon drawings with their own personalities. To the right side of the reels, you will find an animated, floating bodiless 3-eyed alien called the Gargantoon. A cosmic-sounding combination of sound effects plays in the background, supporting the out-worldly theme. You may hear aliens screaming, coins jingling or the sound of a bubble-like popping but irrespective there is always something amusing to hear.

The slot has a cascading feature where wins do not depend on paylines but rather on clusters of identical symbols touching horizontally or vertically. In order to win, you must collect at least 5 symbols in such a formation. After a winning spin, the symbols involved in that win are removed only to be replaced by symbols from above. The game will continue to cascade at no charge to you until you fail to form a new winning cluster. The slot has what it calls a Quantum Leap charge meter which is charged each time you win a round until it is full. Once full, you will win one of four different features. The first possible feature is called implosion that transforms anywhere from three to six symbols into wilds and explodes all symbols that are adjacent. Next, the alteration feature selects one of the one-eyed symbols and transforms all instances of that symbol into another symbol. The demolition feature will explode one-eyed monsters and all matching symbols. Finally, the Incision feature places a wild in the centre, creating two intersecting diagonal lines through the grid with both lines showing the same random symbol. 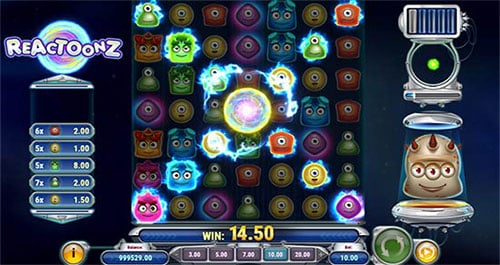 After an unsuccessful spin, there is a chance that the Gargantoon will add anywhere from 4 to 8 wild symbols somewhere on the grid. What's more is that if a quantum queue strikes the Gargatoon then the outcome is a monster sized 3x3 wild that can substitute for all other symbols. This wild can split, moving with each cascade becoming two 2x2 wilds and then nine individual wilds.

If you happen on a spin with four identical symbols in a square pattern, they form a Giantoonz and if they create a winning combination then the size of the win is applied a 2x multiplier. The Fluctuation Feature involves a randomly selected one-eyed symbol for each spin. If you manage a win that involves that same symbol then they position 2 wild symbols in their wake which will substitute for all others.

Reactoonz slot has a theoretical return to player (RTP) of 96% on bets that you can select from the low end of €0.20 to the high end of €100. This is a cluster pays slot based on a fun and quirky alien theme enhanced with creative graphics and sound effects. The top prize is 75,000 coins followed by 30,000, 15,000, 7,500, 5,000 or lower. If you're ready for a close encounter of your own then why not visit the casino for a shot at some interstellar prizes!?!

Give it a go! Fu Er Dai is an exciting online slot machine filled with tons of fun and cool features.

Players who like Reactoonz also play at :
Technical details
Softwares