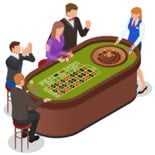 Lightning Roulette is a radical new approach to the classic casino game.

And that’s really saying something, considering that roulette has remained unchanged since the 18th century.

By now, you’ve probably seen countless live games with promising titles that deliver the same gaming experience without changing anything other than the presentation or the style. The main reason for this is that it’s very difficult to come up with new mechanics, since the limitations imposed on developers are defined by the immutable laws of mathematics.

Evolution Gaming has found a way around that using a random number generator (RNG) to introduce random multipliers to every spin. This takes the fixed possibilities imposed by the finite numbers and adds unprecedented chances for big wins.

It’s no surprise something so innovative should have won the 2018 Product Innovation of The Year Global Gaming Award. It also won the EGR Operator Award for Game of The Year.

Evolution Gaming has been on a hot streak of award-winning innovations.

You could say that Evolution Gaming has used maths to turn the tables on the difficulty for improving online table games.

So let’s take a look at how they do it.

The principle behind Lightning Roulette is so simple, it’s hard to believe nobody thought of it before.

In fact, it works so well, they’ve applied it to Lightning Baccarat and Lightning Dice.

With every spin, lightning bolts strike anywhere between 1-5 lucky numbers and zap them with special multipliers. This means that if you place a bet on a number and it gets struck by lightning, potential wins can be 50x, 100x, 200x, 300x, 400x and 500x. That’s pretty good, compared to the standard 30x win for non-multiplied bets.

This adds an extra layer of excitement to each round, as you wait to see which numbers will be struck.

Every spin is supercharged with an electric new thrill once you see your number spark up. Then, all there’s left is to hope that the ball will fall on it to give you the ultimate big win!

All of this happens while a professional live dealer leads the way, at a table with unlimited players. And as regulars know, the collective excitement increases when you have more players at the table.

Evolution Gaming’s new spin on live roulette doesn’t change the way the live table game is played, but it changes the way you feel when playing.

The fundamentals of the game remain the same. You get to admire the skills of a dealer operating a beautiful roulette, and you share in the excitement of watching the ball spin and bounce to a stop with countless people who are sitting on the edge of their seats right along with you.

The lightning feature enhances the feeling of excitement you get from the anticipation.

I love that I can enjoy  an enhanced excitement of anticipation from the comfort of my home or during a commute.

Where to play live Lightning Roulette

If you’re looking for an online casino to play Lightning Roulette in the UK, you’re in luck. Because it’s featured by three of our favourite casinos:

Plus, all of these casinos offer special bonus codes for FeedBACK Casino readers. You just have to click on our links in the reviews to claim them. Remember: terms and conditions (T&Cs) apply, including minimum wagering requirements. So make sure to read them before accepting any bonus offers.

And if you want to try another of Evolution Gaming’s breakthroughs, Play Ojo also features Lightning Baccarat!