Unlock flaming, stashed, frosty and winning wilds under one of four possible free spin scenarios in the 5-reel, 3-row and 243-ways-to-win slot called Dragonz from Microgaming to collect prizes of up to €107,500!

The slot consists of 5 opaque reels with a fantasy background of suspended chunks of rock hovering several hundred feet above the stone and grassy ground. The middle paying symbols include a red, purple blue and green dragon called Flint, Switch, Frost and Gobble respectively with 6 lower poker symbols that include the 9, 10, J, Q, K and A. The bulk of the design has gone into the dragon symbols which can become animated when they are part of a winning payline. Arguably the music that comes with this slot outdoes the visual design which can be overlaid by additional sound effects from triggered features and winning paylines. 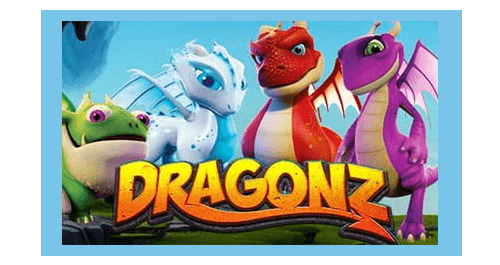 We’ve reviewed Lost Vegas, the newest online slot machine by the same company. Check it out and see what you think!

Included in this slot is a wild symbol that can substitute for all symbols except the scatter. This symbol can form a winning payline with 3, 4 or 5 crediting you with up to €67.50, €150 or €450. Dragonz has what they refer to as the Wild Deal Feature which is randomly triggered during a regular game after a losing spin with a wild symbol displayed on the 3rd reel. This feature randomly distributes additional wilds onto the reels to guarantee a winning combination. Included in the slot is the scatter symbol which can appear on any reel with 2, 3, 4 or 5 going towards a credit of up to €30, €60, €300 or €3,000 respectively. Collect at least three to unlock one of four free games feature. 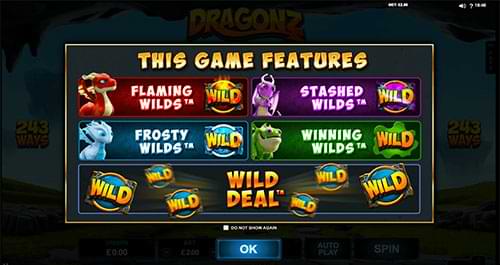 Dragonz slot can be played with bets of as little as €0.40 and as much as €30. This is a dragon themed slot that offers wilds, scatter prizes and one of four free spin modes. The graphics and sound effects do their part to make this an enjoyable theme. If you want to try the game you can visit the casino to do so for free or start playing with money.

Check out the latest slot machine we have reviewed and have a chance to win big with Moby Dick!

Players who like Dragonz also play at :
Technical details
Softwares