Booongo brings back the nostalgic 8-bit arcade graphics era in the space-invaders style Wild Galaxy. This is a 5-reel, 3-row and 20 fixed paylines slot where you can win up to 1,000 coins on a payline!

We have the latest and greatest online slots machines for you to play. 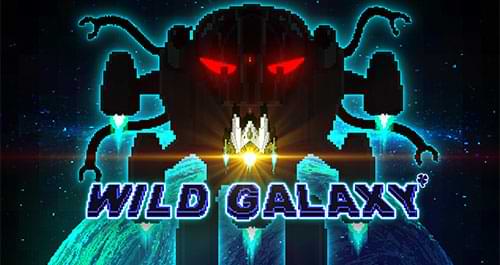 In an 8-bit universe, the rolling star filled galaxy has all sorts of natural and unnatural bodies that include planets, space stations and space ships. Included as part of the top paying symbols are three space ship symbols with five poker symbols rounding out the lower paying. Of course with arcade graphics you would expect to have arcade style sound effects and the slot does just that with a quick paced tune. When the reels are in motion additional arcade sound effects are unlocked with winning paylines or triggered features.

We suggest you try Supreme Fortune, a new online slot game from the same provider as this one. 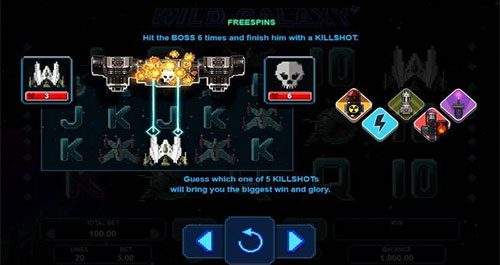 This slot has a Cascading Feature where symbols involved in a winning payline explode to leave empty spaces which are then filled by the symbols above which follow down to fill the gaps. This can repeat provided new winning combinations are formed at no cost to you. Set in space, the space fighter craft wild may appear on any space which substitutes for any other symbol except the radar scatter symbol. The radar scatter symbol acts as a radar which seeks out the space fighter wild and when it finds it then 10 Free Spins are triggered. During the Free spins, hitting the Boss 6 times will end him with a killshot and you are invited to guess which one of 5 killshots might have the highest price. The Boss will disappear if it kicks you 3 times.

Defeat the enemy and make the galaxy safe

Wild Galaxy slot is a medium volatility game meaning that you may win a little less often but when you do win then prizes may be a little higher in value. The theoretical return to player (RTP) is 96.5% for this game and you can win up to 1,000 coins with lesser prizes of 500, 300, 200, 100 or lower. The slot is based on an arcade space invader style theme with 8-bit graphics and sound effects that includes scatters, wilds, free spins and cascading feature. For a chance to play visit the casino today.

If you're looking for a new slot game, we recommend you to try 777 Gems, available at the same place as this one.