Based on the theme of Norske mythology, Viking Gods: Thor and Loki from Playson is the 5-reel, 3-row and 15 fixed paylines slot, where you mingle with the gods for prizes! 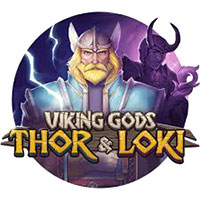 Imagine yourself in a wintery Scandinavia scene a few centuries back in time with a Viking boat on icy waters and houses and trees capped with snow. The symbols included are Loki and Thor but amongst the other symbols are the blue crystals, pink crystals, and three trinkets with the lowest paying symbols consisting of three letter symbols.

You should check out Fireworks Master! It's a great game for any slot enthusiast.

Features sent down from the Gods

The slot has three wild symbols made up of a wolf, 'W' and sea serpent which substitute for any other symbol for the chance to create or enhance a win line. There is also a Thor Bonus and Loki Bonus expanded wild during the main game. The appearance on the 3rd reel unlocks 10 Thor or Loki Free Spins. If the Thor Free Spins is triggered then you are guaranteed a World Serpent Wild appearance. During this feature, your goal is to grow the World Serpent Wild to the Colossal Wild.

A blue crystal appearance adds 1 step on the progress bar and as you proceed to a new level the colossal wild grows from 1x1 to 2x2, 2x3 and finally 3x3. By advancing to a new level you add additional free spins of 1, 2 and 3 respectively. The Loki Free Spins involves a sticky wild symbol on the reel in the same cell until the lock is broken which only happens when the wild is part of a winning combination. Each pink crystal adds 1 step on the progress bar. Advancing a level changes the characteristic of the sticky wild symbol. It goes from regular to sticky + 2 locks to 2 sticky wild + 2 locks to 2 sticky wild + 3 locks. Each new level adds additional free spins with 1, 2 or 3 respectively. The game also has a Viking Gods Feature randomly triggered where a 1x1 size bonus symbol lands 2 wild symbols on the two leftmost reels. A 2x1 bonus symbol lands 4 wild symbols on the reels. The Thor Bonus symbol lands wild symbols in stacks on the reels and the Loki Bonus symbol lands wild symbol any place on the reels. The game also offers you the chance to complete one of several listed achievements to win one of the bonus modes.

Playing with the gods 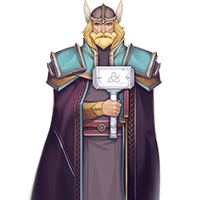 Viking Gods: Thor and Loki slot has a theoretical return to player (RTP) of up to 96.88%. It Is available in a desktop and mobile version on stakes that range from €0.30 to €105. The game has a medium volatility meaning that you are likely to win a little less often but when they do happen the payouts being a little higher than a low volatility slot. For the opportunity to battle serpents, be granted wilds from the gods and a host of other features visit the casino soon!

Claws vs Paws is a free-to-play online slot machine that you won't want to miss!