GAME TEST / Ticket to the Stars

A February 2019 release, Ticket to the Stars rockets you into outer space for the time of your life. Whatever you’re after, whether it’s wealth, romance, R&R or adventure – there’s a seat waiting for you on-board this rocket to the stars! If you’ve seen it all before here on earth, then why not blast off on a cosmic flight to an exotic destination on 5-reels and 25 fixed paylines for over 9,700x bet!

The future of travel

The colourful cascading slot features five upper-value symbols: a handsome pilot, lovely stewardess, robot butler, champagne bottle on ice and a suitcase. There are also six lower-value and diamond-shaped symbols. The soundtrack in combination with the space-age themed audio effects are nothing short of spectacular, particularly when combined with the artwork which heralds in the future of travel.

Unlock 15, 20 or 25 free spins with 3, 4 or 5 scatters which can appear on any of the reels. During the feature, the Unlimited Multiplier Meter situated to the left of the reels, increases by a factor of x1 after every third win. Each time it is filled, two more spins are added to your total. 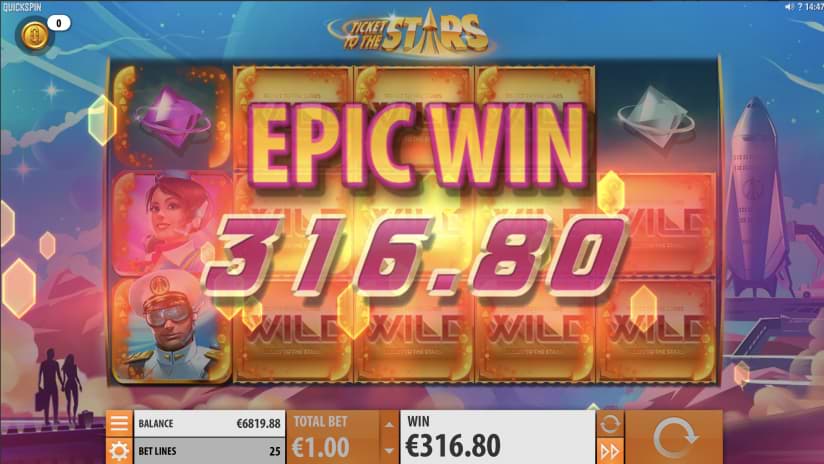 A key feature of the slot is called the Swooping Reels. This is a cascading feature triggered during the base game and free spins after a winning payline. Here, the symbols involved explode to leave empty spaces which are filled by symbols that tumble from above, for the chance to create fresh wins, for free. This feature can continue, in a loop, provided new payline wins are created.

Ticket to the Stars slot has an RTP of 96.52% and a range of bets that can be varied, starting from €0.25 and ending at €100. This is a high volatility slot meaning you may need to play with a higher bank roll to play long enough for better odds of unlocking a larger win. This slot is compatible on an Android or iOS device using a mobile or tablet. You can, of course, use your desktop as well. Quickspin invites you to go on a cosmic voyage and collect some great prizes and entertaining features along the way.

Players who like Ticket to the Stars also play at :
Technical details
Softwares