Three Kingdoms from Red Tiger invites you to choose one of three Chinese kingdoms led by the warriors Tao Tao, Sun Quan or Liu Bei in the 5-reel, 3-row and 20 fixed paylines slot that give you a chance to win up to 500 coins on a payline!

No matter what your favorite game is, you can find it here. 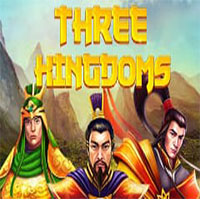 The slot has an Ancient Chinese theme and starts with the 6 different gem symbols at the lower end of the paytable with the higher paying base Tao Tao, Sun Quan and Liu Bei images. As you might expect the graphics for the gems are simple by relative standards but the higher paying symbols are of more detail and more than compensate. The slot has some excellent sound effects that includes Chinese themed music that plays during the spinning of the reels with added audio effects from the creation of winning paylines or unlocked features.

At the commencement of the game you are invited to choose from amongst 3 warriors who will then be your expanded wild for the duration of play expanding to cover all three spaces of a reel. The expanded wild feature is randomly triggered during any spin and may appear on multiple reels. The other feature of this slot is that all wins pay adjacent as a pose to the conventional left to right slot which increases the odds of creating winning combinations. 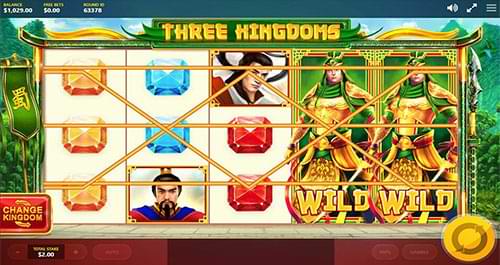 Three Kingdoms slot has a theoretical return player (RTP) of 95.15% on stakes that range from €0.20 to as much as €60. Payline wins are calculated by taking the number of coins illustrated in the paytable and multiplying them by stake per payline. The top payline win is 500 coins, followed by 100 coins or less. While the payouts are not amongst the highest we've seen, the combination of 20 paylines, the expanded wilds and the adjacent pays increase the odds of combining for some higher paylines. The slot has a Chinese warrior theme supported by some nice graphics and sound effects despite being relatively short on features which takes a little of the fun away. You can visit the casino today if you want to give the game a try before playing for real money or get started right away.

Gold Star is a great online slot game that we recommend!