The Grand is a slot released March, 2019, by the developer Quickspin. This game boasts, ‘a touch of The Great Gatsby’, which is a reference to the novel by the American Author, F. Scott Fitzgerald. The Grand explores the same theme of opulence during the roaring twenties and Hollywood’s Golden Age of cinema.

If you are looking for more information about online slots machines games, you can read our helpful review online.

The slot is designed in an art deco style, with an aura of sophistication associated with wealth, presented over a 3-3-4-4-5-5 reel configuration. It features synchronized reels, wilds, nudge reels and free spins with a bonus game. Higher-value symbols include a green and a purple diamond with four poker suit symbols at the lower-value end. Included as part of the package is a sleek musical number and you just might hear the roaring and clapping of fans in the background or other audio effects.

The Random Wild Feature may be triggered automatically during a spin. When it does, anywhere from four to eight wilds are placed on the spaces to overlay symbols which are not free spin scatters or other wilds. 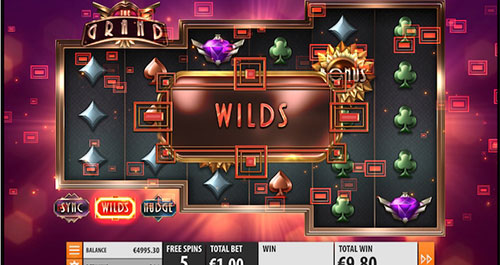 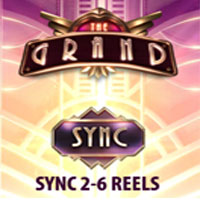 For a greater chance at more prizes, there is the possibility that up to six reels will spin in synchronicity. Pairs of columns with identical heights spin in unison to produce identical results.

If you’re not quite satisfied with the outcome of your spin, then the Nudge Reels Feature lets you take matters into your own hands by doing exactly that! Nudge up to a total of three reels for the chance to land free spins and bonus symbols.

The free spins scatter may appear on any of the six reels. By landing 3, 4, 5 or 6 at a time, you will collect 6, 9, 12 or 15 free spins respectively. While in free spins mode, you may be lucky enough to collect 3 bonus symbols on the 3rd, 4th and 5th reels. The effect of this is to unlock one of the following features: synchronized reels, wilds or Nudge Reels. Simultaneously collect 1, 2 or 3 additional free spins. It is also possible to win combinations of two or three features. 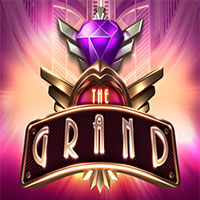 The Grand slot is high volatility, so wins may be harder to come by but when they do are likely to be higher in value. The game has a return to player (RTP) of 96.58% and can be played with wagers the begin at €0.10 and end at €100. Fans of wealth-themed slots can relive the glory days of the roaring 20’s by heading to one of our recommended casinos.

Prime Zone is a great online slot game that we recommend!

Players who like The Grand also play at :
Technical details
Software