GAME TEST / The Phantom of the Opera

Microgaming has taken a highly acclaimed adaptation of Andrew Lloyd Webber's The Phantom of the Opera and produced the 5-reel, 3-row and 243 ways-to-win slots. The slot incorporates some innovative features that are complemented by the musical score and coin wins of up to €116,000!

Graphics from the award-winning film 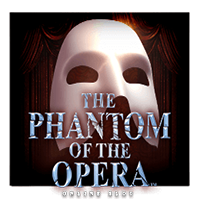 The Letter Bonus is unlocked with the Letter symbol on the 5th reel which can present up to 20x total bet. The Chandelier Bonus is a randomly triggered feature where 2 to 3 reels turn wild. 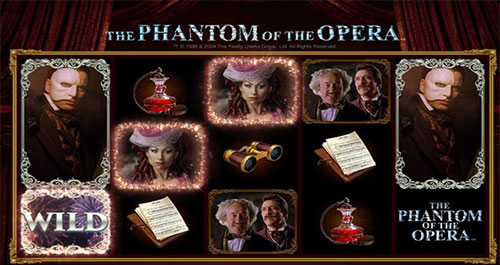 The wild symbol has the ability to substitute for any other symbol except the scatter and Letter symbol and can appear as double-stacked during base games.

The scatter symbol appears during the base games and rewards you with prizes. Three or more symbols on any position on the reels will trigger the Feature Selection Screen and you have your choice between the Music of the Night Free Spins, All I Ask of You Free Spins, Masquerade Pick Bonus or a random selection.

Looking for more games based on movies, TV shows or books? Tarzan from Microgaming is the slot for you! 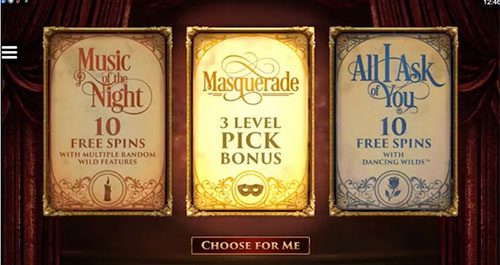 The Music of the Night Free Spins unlocks 10 free spins with random Phantom Features. Each spin has the potential for either up to 5 randomly placed wilds or up to 3 random wild reels, a random multiplier of 2x to 4x, or 2 to 5 additional free spins.

Multiple Phantom Features can be triggered on a spin. The Masquerade Bonus is where 3 picks are awarded by progressing to level to 2 and 3 you gain an additional 2 and 1 pick respectively.

Each level offers the chance at cash prizes. The All I Ask of You Free Spins is your shot at 10 free spins with dancing wilds. In this scenario, Christine and Raoul's wild symbols dance above the reels.

Both symbols move to a random adjacent position on every spin. When they land on the same space a 3x multiplier is applied to all wins on that spin.

If they land on the same reel the reel turns wild or land next to each other on adjacent reels then both reels turned wild.

Finally, if they land diagonally on adjacent reels then both wilds expand to form 2x2 wilds.

Looking for more games based on movies, TV shows or books? Quickspin's Pied Piper is the slot for you!

The Phantom of the Opera slot has a theoretical return to player (RTP) of between 96% and 97% with medium volatility so you may need a higher bankroll if you play with higher stakes.

The minimum stake is €0.30 and the maximum €15. The slot is due out in September 2017 and we invite you to visit the casino to try it for free or get started playing.

Players who like The Phantom of the Opera also play at :
Technical details
Software