We’re off to the races with Netent’s 5-reels and 20 fixed paylines slot release called Scudamore’s Super Stakes with top prizes of 10,000 coins per payline!

There are a ton of online slots machines games here. Come on in and have some fun! 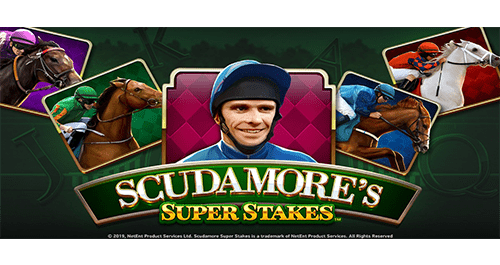 We’ve reviewed Golden Grimoire, the newest online slot machine by the same company. Check it out and see what you think!

Peter Scudamore acts as the wild symbol which can substitute for all symbols except the gold cup scatter symbol in the base game and the Bet Slip symbol.

The gold cup scatter symbol can appear on the odd numbered reels and when all three appear then the Peter’s Classic Cup Feature Is unlocked.

When this feature is unlocked, anywhere from 2 to 5 horseshoe symbols are placed sporadically on the reels which then they transform the symbols beneath them into wilds.

Unlocking the Peter’s Classic Cup Feature expands the reels, and new bet lines are added. If you predict the winning horse then you can win up to 5,000x bet.

Finally, the Bet Slip during the main game records the quantity of times a selected symbol makes an appearance on a determined number of spins and pays the product of the multiplier and bet value.

Race to the casino

Scudamore’s Super Stakes slot has a return to player (RTP) of 96.11% with variable wagers from €0.10 to €100. Designed in HTML5, the slot races alongside you anywhere on your Android and iOS device. Sports themes, and particularly ones based on horseracing are pretty rare so this is your chance to visit one of our casinos and see what this game is all about!

Check out the latest slot machine we have reviewed and have a chance to win big with Turn Your Fortune!