Visit the Emerald Isle in this Celtic themed slot called Ryan O'Bryan and the Celtic Fairies from Redrake where 5-reels, 3-rows and 30 fixed paylines combine to reward you with prizes that can reach up to 2,000 coins on a payline!

If you're looking for more online slots games, you've come to the right place!

Redrake is not one of the more well-known developers but they do an outstanding job with the graphics in this slot. The background to the game is a forest floor with an animated Leprechaun to the right of the reels called Ryan O'Bryan. The top paying symbols includes a Leprechaun, and a green, yellow, blue and red fairy. Beneath these are the pint of beer, Leprechaun's hat, pipe and gold coin. When the reels are idle, one can hear the sound of birds chirping and other audio effects from Ryan. When the reels are in motion an Irish themed tune plays which attempts to create a cheery mood. Additional audio effects will pop up as you unlock features or generate a winning payline. 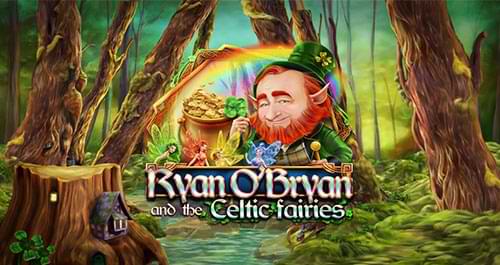 You can test or play for free the Eastern Goddesses online slot machine. So you will know if this game is for you!

Amongst the features on the Emerald Isle, you will find the rainbow wild which will substitute for all symbols except the bonus symbol. The wild can form a winning payline in itself with 3, 4 or 5 crediting you with 30, 300 or 6,000 coins. The Shamrock scatter symbol can appear on the 1st, 3rd and 5th reels and allow you to mine prizes in the Gold Pot Minigame where you are invited to pick 3 of 8 pots to reveal you prizes.

The pot of gold Bonus symbol may appear on the 2nd, 3rd and 4th reels with all three unlocking the free spins feature. The game randomly selects your multiplier and number of free spins to which you are entitled using a roulette wheel. The Fairy Wilds Central Reel Feature where the centre reel spins while the fairies pull out wild symbols and distributes them on the reels. After a random spin, the Leprechaun leaps applying a multiplier to the prize. Another randomly triggered feature is the Fairy Dust Wilds where Fairies flutter over the reels dropping fairy dust that transforms into wilds. Another feature is the Stuck Reel where an animated Ryan hits the stuck 4th reel to reveal the results. The final feature is the Leprechaun Extra Bonus that reveals a bonus symbol which is one down and two to go towards triggering the free spins feature.

Ryan O'Bryan and the Celtic Fairies slot has a theoretical return to player (RTP) of 95.4% with stakes ranging from €0.06 to €195. The top payline will reward you with 2,000 coins followed by 300, 200, 100 or lower. With a theme of Leprechauns and fairies, visit the casino today for your shot at your own pot of gold!

We recommend you to try Jack O' Lantern vs the Headless Horseman, an online slot game available at the same supplier as this one.

Players who like Ryan O'Bryan and the Celtic Fairies also play at :
Technical details
Softwares