Rise of Dead is an Ancient, Egyptian Pharaoh themed slot from Play'n GO.

The Book of Thoth was believed to have been written by the Egyptian god Thoth. He was believed to be the god of writing and wisdom. Now, Play'n GO has tapped this theme about legendary books of power and dead Pharaohs in Rise of Dead. This 5-reels and 20 paylines slot boasts 2 big features in the Ancient Free Spins and Gift of Gods for prizes of up to 5,000x bet!

Throughout the ages, there were many extraordinary books said to possess certain powers and many developers have jumped on this theme. For example, Novomatic released the smash hit Book or Ra Deluxe with a book that possessed the powers of both a wild and scatter symbol. Rise of Dead is a beautifully illustrated slot from Play'n Go with reels designed into stone slabs with carved hieroglyphs.

Imagine a solemn stone chamber illuminated by flickering flames. Egyptian music, worthy of the goddess Bat, plays as your game unfolds. The high-paying symbols include three reincarnated zombie-like Pharaohs. These symbols are extra special since they award a payout with as little as 2 symbols instead of the typical 3 symbols.

Read our review of Demon from the same provider.

The scarab symbol represents a wild that has the ability to appear on any of the reels. A strength of this symbol is that not only can it form its own winning payline but it can also form its own exclusive winning payline with as little as two symbols. The scarab wild can payout 0.5x, 2.5x, 12.5x or 125x total bet in sets of 2, 3, 4 or 5 respectively.

The two big features are the Gift of Gods and Ancient Free Spins.

During the main game, the Gift of Gods Feature may randomly be awarded where symbols on the three odd-numbered reels are stacked with a randomly chosen Mega Stack symbol. This increases the odds of creating large payline wins, but does not guarantee it. 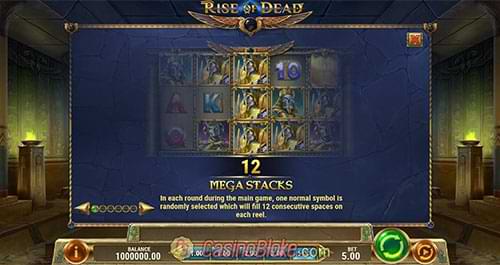 In Rise of Dead you will also find the 10 Ancient Free Spins Feature which can be triggered with 3 ancient scroll scatter symbols on reels 1, 3 and 5. The scrolls are unfortunately not scatter-pays so they do not award cash before triggering the extra spins. This feature comes loaded with extras! This starts with the fact that the appearance of 1, 2 or 3 scatters award 2, 4 or 10 additional extra spins. 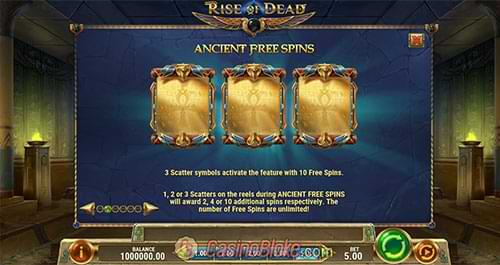 There is also the fact that the scarab wild symbol can appear as stacked of as tall as 6 or 7 spaces on each of the reels. The three high-paying Pharaoh symbols have the ability to expand to fully cover a wheel if they can create extra winning possibilities. Finally, it is within the extra spins that stacks of low-paying royal flush symbols can appear as 8 spaces tall. 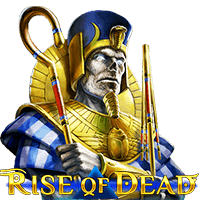 At first glance, I couldn't help but have flashbacks to another Ancient Egyptian themed slot from Yggdrasil called Tut's Twister. Rise of Dead has a number of things going for it including Play'n GO's signature graphics and audio effects. I particularly liked the extra spins feature where I could take advantage of stacked wilds and expanded symbols. While this slot is no Book of Dead, it does offer good entertainment value for high volatility fans!

Rise of Dead slot is a high volatility game meaning that you may require a higher bankroll in order to play it for longer. This late August, 2019, release, with an RTP of 96.53%, can be played with wagers varied from £0.10 to £100. It has been optimised for play on mobile/tablet and desktop using HTML5. If you are on the move, then you can enjoy it on an Android or iOS device.

Players who like Rise of Dead also play at :
Technical details
Softwares