Take a trip back in time to the ice age where you will defrost woolly mammoths, sabre-toothed tigers, and big bears in Quickspin's Razortooth. This 5-reel and 243 ways to win slot is a chance for you to unlock the coins frozen within the ice for wins of up to 800 coins per payline!

Our online slots review will give you the information you need to make an informed decision. You can read more here.

The slot uses gemstones to act as lower paying symbols, which I found to be refreshingly different from the all too common poker symbols. Prehistoric animals represent the higher paying symbols. The reels look like slabs of ice atop a background of huge trees and foliage. The animal symbols are designed with impressive graphics and colour. The sound effects and music are enough to make the game appealing.

Have you played Firestorm yet? Read our review to see why we think it's the best online slot game so far.

Call of the wild

The game has a suite of features, which includes the Hunt random wilds feature where the sabre-toothed tiger will pounce and roar across your screen during base games to leave behind up to three additional wild symbols. The savage wild free spins feature is unlocked by the appearance of three bonus scatter symbols and will trigger five free spins. During the spins, up to two savage wild symbols will appear and expand to cover the reels. As is common for slots, you will find a wild symbol, which in this case is represented by the razor tooth logo symbol and substitute for any symbol other than the bonus scatter symbol. The Savage wild appears during the free spins feature and is a stacked wild symbol and substitutes for all symbols except the bonus scatter symbol. 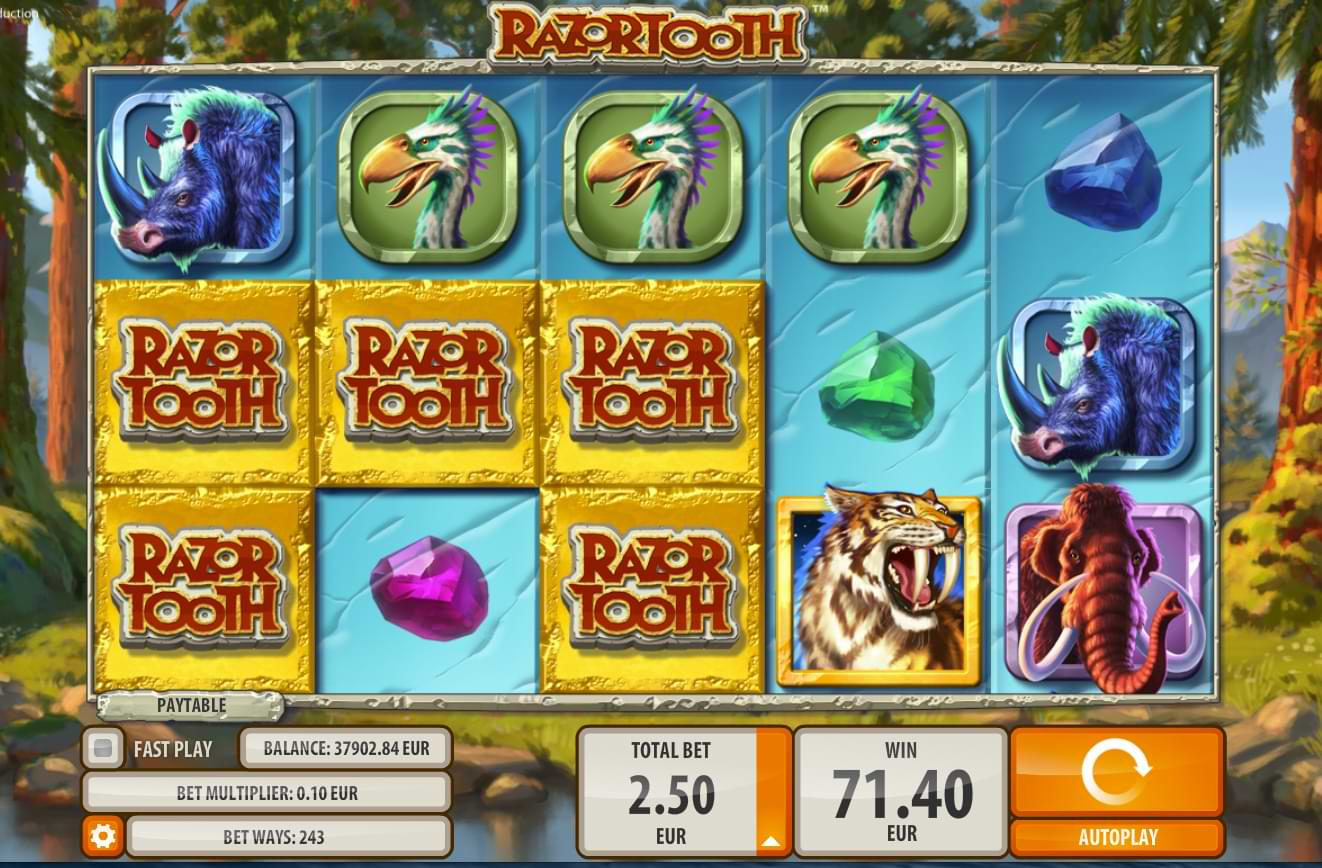 Host of features that fall a little short

Razortooth allows you to bet from as little as €0.25 to as high as €100 by selecting from a list of predetermined amounts. The game has a medium variance, as most wins are difficult to come by or of smaller amounts with a larger win coming very infrequently. The theme is a less common one than most and the developer blends the graphics, sound effects and music well to deliver a well-rounded game with a host of useful and entertaining features. I found that the free spins feature could be triggered on occasion and was a good way of topping up with additional coins. With only a maximum of 800 coins per payline to be won though, the game could have benefited from some more generous features. A multiplier during free spins would have been a welcome addition along with a more generous number of free spins in contrast to the rather stingy five free spins offered when you land three bonus scatter symbols. If you can overlook this, then the theme alone might make this game worth a closer look.

Players who like Razortooth also play at :
Technical details
Softwares