GAME TEST / Planet of the Apes

The visionary product of a 1963 novel by Pierre Boulle, Planet of the Apes has inspired Hollywood cinema through a number of movies that follow a world ruled by apes lead by the ape Cesar.

Netent has entered into a license agreement with 20th Century Fox to adapt the story into a 5-reel, 3-row and 20 fixed paylines slot of the same name.

The mid to higher-paying symbols are made up of characters from the movies with the lower end made up of royal flush poker symbols.

The graphics are dazzling and the slot is interlaced with scenes from the movie with correspondingly explosive audio.

Amongst the features expected, a wild symbol which may appear as stacked which substitutes for just about any other symbol except the scatter or bonus to create winning paylines.

When a reel on the left (Rise) set has stacked wilds it is replicated on the corresponding reel on the right side (Dawn).

If you like movies or TV series, there is The Mask slot by NexGen Gaming available

The Dual Feature is triggered on any spin and selects a distinct random regular symbol for each set of reels.

Each set of reels then only contain these corresponding symbols with the rest of the spaces appearing as blank.

A spin that lands these corresponding symbols become sticky and you get an additional free spin and this can continue provided you land more symbols which gives you a chance to build big prizes!

Looking for more games based on movies or TV series? Ted Megaways from Blueprint Gaming is the slot for you! 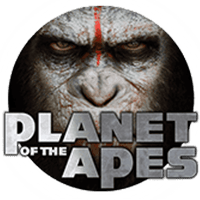 When you collect 3 Rise scatter or 3 Dawn scatter symbols you trigger the corresponding Rise or Dawn Free Spins.

During the Rise Free Spins, a meter keeps track of the number of wilds that appear until the end of the feature at which time they are randomly placed back on the reels prior to the evaluation of any wins on the last spin.

On the other hand, the Dawn Free Spins contains three different meters that include Multipliers that increase by 1x every time the meter is filled, Extra Wild transforming a different human into wild for the duration of the free spins each time you fill the meter and 3 Extra Free Spins.

While the reels spin, you get the chance to add to the meter every time a corresponding collect symbol lands on the spaces.

The meter will become full after the 3rd addition to a corresponding multiplier, extra free spins or extra wild meter.

Planet of the Apes slot is available both online and on mobile devices and has a theoretical return to player (RTP) of 96.33%.

The slot has all the components of a great game with stunning visual/audio effects, a great theme and superb features.

The slot is slated for an October 23rd 2017 release date so stay tuned for this highly anticipated slot!

Players who like Planet of the Apes also play at :
Technical details
Softwares