From the developers at NextGen Gaming comes the 5-reel and 50 fixed paylines slot Merlin’s Millions that promises a magical experience with prizes of as much as 300x your bet!

We start with the poker symbols at the entry-level payout end and move on to a flask with eyeball in a purple elixir, wizard’s glowing red jewelled staff until finally we reach the spell book. The animated 3d Merlin stands to the left of the reels staff in hand ready to cast his magic to enrich your pockets! He gazes acutely at the reels waving his finger and sometimes even his staff to reveal prizes. He does get a little side tracked at times creating his magical orbs that end up exploding in his face for just the right amount of comic effect. You will also spot him tossing out coins at times or dancing after a good-sized win. Magical music plays in the background peppered with the sound effects of owls hooting or Merlin knocking or winning paylines. The graphics are standard for this slot, conceptually creative but I did found them a bit grainy which is a shame.

We’ve reviewed Owl Eyes, the newest online slot machine by the same company. Check it out and see what you think! 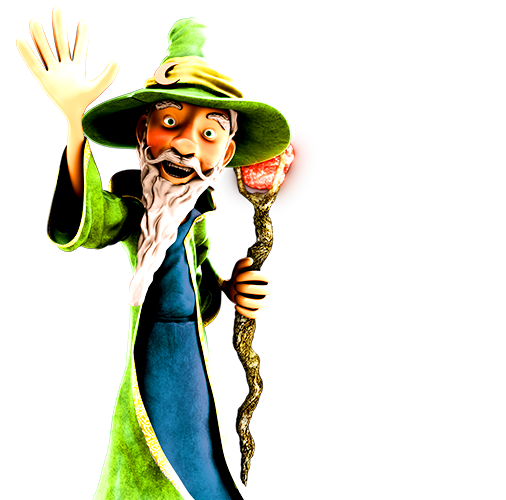 During play, you may have the fortune of landing 3 orb scatter symbols appearing on the 2nd, 3rd or 4th reel which would mean unlocking the 5 free games feature and for added effect Merlin enchants the symbols transforming some of them into wilds. This could even mean entire stacks may become wild! The free games feature can be re-triggered while running.

The owl bonus symbol is your ticket to adding cash prizes to your pile. When three owls appear on the 1st, 3rd and 5th reels, the feature is unlocked and all the symbols on the reels become owls. You then choose from amongst the choices and continue to do so revealing the hidden prizes. This continues until you turn over the collect message at which point the feature ends and you walk away with your bounty!

See if Merlin’s magic rubs off on you

Merlin’s Millions can be played for as little as €0.50 per spin up to €70 with the top Superbet level. The theoretical return to player varies from 95.076% to 95.631% increasing along with your Super Bet wager. You can win up to 300x your bet per line and the Merlin wild acts up to a 10x multiplier. With a great theme and features to keep you entertained why not try to see if some of Merlin’s magic rubs off on you?

Check out the latest slot machine we have reviewed and have a chance to win big with Ramesses Riches!