From the fiery pits of Hades comes this next 5-reel, 3-row and 20 fixed paylines devilish delight from Booongo called Hell's Band where succumbing to temptation could put you in a position to win up to 1,000 coins on a payline!

If you're looking for an online slots machines game, this is the perfect place. 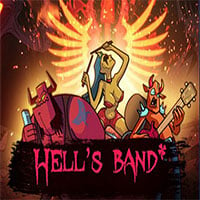 The slot is not without humour, but it is darker than most slots. Set in the pits of the netherworld, with skulls and devils along the edges of the stage you will see drums and speakers littering the floor. The opaque reels contain 5 upper paying symbols that include the devil on microphone, demon on guitar, female demon on drums, skeleton hand and tombstone. The lower paying symbols are represented by 5 poker symbols. The slot has a heavy rock beat coming to you from the demonic rock band that will have you rocking your head. There are additional sound effects in the form of additional rock music that is triggered by winning paylines or unlocked features.

In this game, any symbol can become wild substituting for any other symbol except the scatter. The slot includes a free spins scatter with 3 appearing simultaneously unlocking 13 free games. 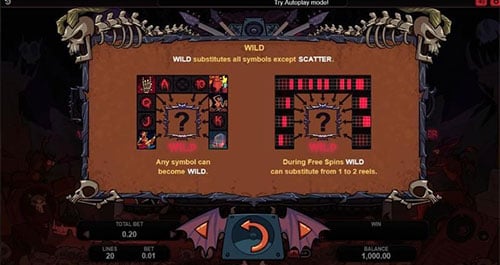 During the feature the scenario changes as you are now backstage and any symbol can become a scatter. By landing three more scatters you unlock an additional 6 free spins for each additional scatter symbol. For an added chance of hauling away decent prizes the wild can become expanded and appear on up to 2 reels. Included in this slot is a craps-style bonus game which is unlocked by identical symbols appearing in the wild and scatter boxes. In this feature you can roll the dice up to 5 times to send the band on tour and try to take the house.

Deal with the devil

Hell's Band slot has stakes that vary from €0.20 to €100 on bets of as little as €0.01 to as high as €5. The slot has a low volatility meaning that you are likely to win more often in amounts that are close to your bet size with larger prizes on occasion. In addition, the game has a theoretical return to player (RTP) of 96.9%. The top payout is 1,000 coins but you can also win amounts of 400, 250, 200, 150, 100 or lower which can be combined to form some pretty compelling prizes. The payline wins are calculated by taking the number of coins indicated in the paytable and multiplying them by the bet per payline. You can visit the casino today if you are ready to sell your soul for a chance at some devilishly naughty prizes!

Give it a go! Wild Galaxy is an exciting online slot machine filled with tons of fun and cool features.