Cryptologic introduces the DC Comics inspired emerald superhero Green Lantern. This 5-reel and 50 fixed paylines slot presents a chance for you to win up to 10,000 coins per payline with five Sinestro super-villains symbols!

You have the option of playing in either normal mode or power up your ring to play in the Bonus Bet Activated mode. Here you go from a background muddled in city devastation to a space odyssey of intergalactic proportions. The symbols consist of the all too unimaginative poker symbols, which help to identify the lower end of the pay scale but the symbols that follow include the super villains Hector Hammond and Sinestro. The graphics are comic book style, colourful, with some animated sequences during winning paylines and the bonus feature. The sound effects are standard and the supporting music is inspirational, complimenting the game nicely. 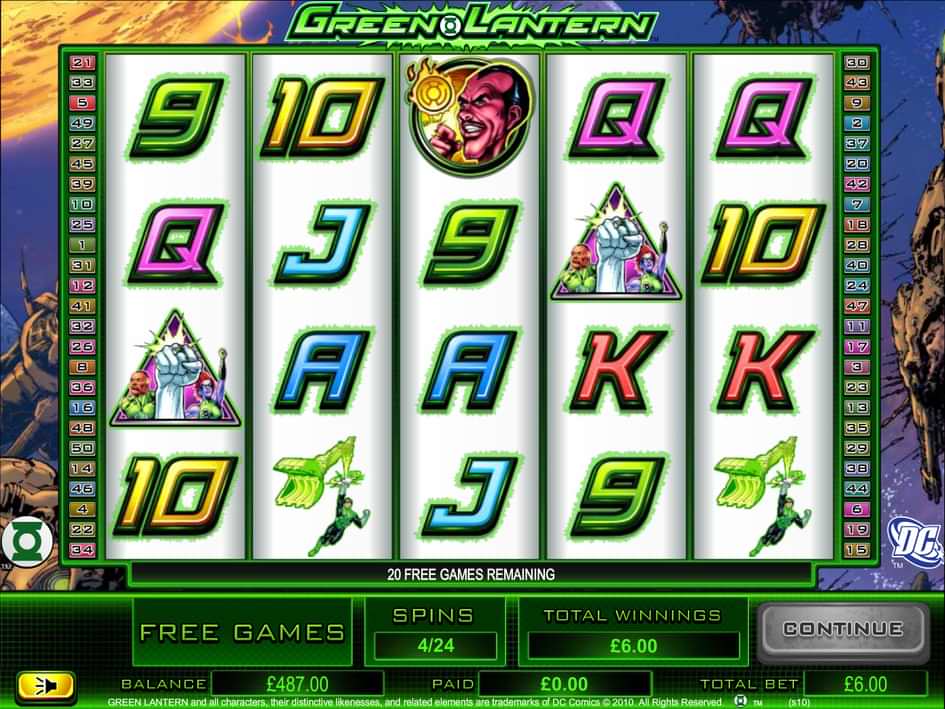 This slot has some common features, which includes the Green Lantern wild symbol, which can appear on reels 2 and 4 and replace symbols other than the ring scatter and ring bonus symbols. During the base game, a 2x multiplier is applied to winning paylines and a 4x multiplier when the free games feature is triggered. The wilds can appear stacked. The slot also offers the 24 free games features when the Green Lantern symbol appears on the 2nd and 4th reels and the lantern symbol appearing on the 3rd reel. While active, whenever a lantern appears, an extra Green Lantern wild is added to the stacked wilds while spinning, increasing your likelihood of striking wilds. They stay stacked for the remainder of the free games.

This feature is only available when the bonus bet is activated, and consists of bonus ring scatter symbols that pay out coins regardless of their position on the spaces provided you land at least two. Should you land 3, 4 or 5 symbols then you are awarded 200, 750 or 5000 coins with feature. Two symbols will pay you 100 coins. During this feature, the hero Green Lantern does battle with the villain to determine the multiplier applied to your bet of up to 100x. The bonus bet feature is activated by playing an extra 10 coins. If you choose not to play with the bonus bet activated, then you can win 100, 200, 750 or 5000 coins by landing 2, 3, 4 or 5 ring symbols.

This slot offers you two ways to gamble your winnings for an increased shot of taking home larger prizes. The first is the red or black card gamble feature where you guess the colour of the next card for a chance to double you winnings. You can also try quadrupling your winnings by correctly predicting the suit of the next card. Both games can be played sequentially up to 5 times. 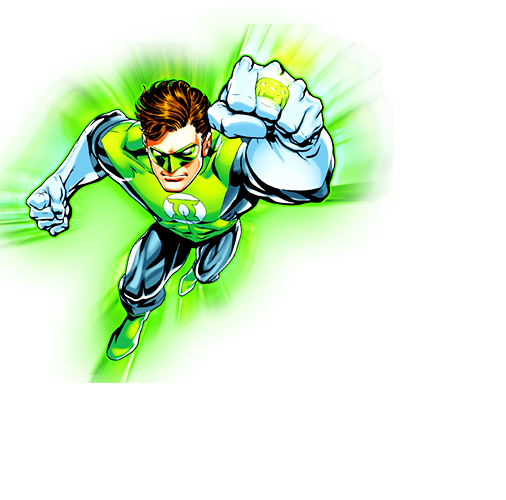 The Green Lantern is a comic book interpretation by Cryptologic that offers a few thematic features that keep things interesting. With a medium variance, you will likely find sizeable wins harder to come by. There are two theoretical returns to players (RTP) of 92.35% and 95.341% depending on whether you choose to play with the Bonus Bet inactive or activated. You can play with bets ranging from €0.60 all the way up to €120. With 50 paylines, the game in theory offers many ways to win coupled with the wilds, scatters, bonus symbols and gamble features. With 24 free games I must say I was under-whelmed with how little the free spins feature actually rewarded me, despite managing to trigger it several times. If you are motivated more by themes then payouts, I would suggest you give this game a try.