Finn's Golden Tavern is a December 2019 release that builds on the success of Finn and the Swirly Spin. It features a magical Leprechaun and functions using a spiral twist pattern spin mechanic. Leprechauns are strange, so why should a slot based on one not be as well? There are four symbols that resemble a frothy pint of ale, wine bottle, teapot and corked jug. There are also four gold coin pieces with values of 5, 10, 20 or 50. They pay like scatter symbols with three identical coins rewarding you with their sum. The graphics and music are smooth like the original. 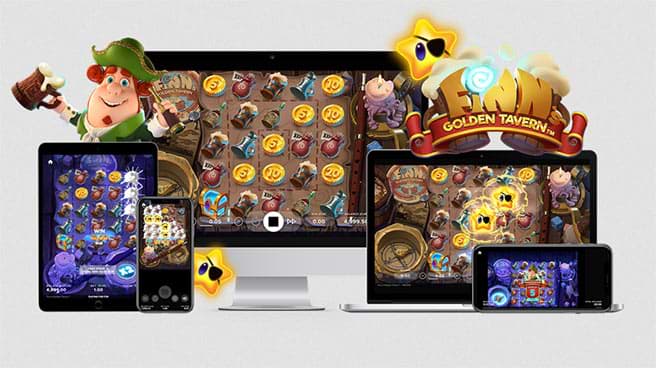 You can test or play for free the Wings of Riches online slot machine. So you will know if this game is for you!

The slot utilises an Avalanche Feature where three or more identical symbols touching horizontally or vertically explode and give rise to a cascade of symbols that fall to fill in the spaces. This can continue provided new combinations of winning symbols are created.

The Random Coin Feature will transform low win symbols into coin symbols and can be triggered when the Extra Spins chests symbol falls within the Swirl of symbols around the centre position.

Once the chest symbol reaches the centre position of the reels, then 5 extra spins are awarded. A multiplier meter appears for the extra spins that is progressive and goes up by one step for each wild produced during Avalanches. For every step five steps climbed, the multiplier increases by a factor of 1.

The slot has a low to medium volatility with an RTP of 96.1%.

During extra spins mode, if the chest symbol appears in the centre-most position, then the coin bonus feature is activated. Here, several coin symbols are placed at various positions on the reel with random values.

On a losing spin during the base game, the Fist Slam Feature might be randomly triggered and shift a coin symbol to create a win.

So what did I think of Finn's Golden Tavern?

Finn's Golden Tavern represents part II of the Leprechaun's adventures. In terms of the soundtrack and artwork, I would have to give a slight edge to the original. The features in the sequel are entertaining, and there are enough of them to keep you going for a while. A top payout of 1,000x total bet may not seem very exciting to high volatility fans, but for those with a lower risk appetite, this could be an entertaining option if you enjoy this theme.

If Leprechaun themes are your pint of ale, then head on down to the Golden Tavern and order a pint!

With a spiral spin mechanic, highlights of the game include wilds, extra spins with a progressive multiplier, extra spins chest and coin bonus.

Finn's Golden Tavern slot has an RTP of 96.1% and a low to medium variance. Vary bets from a minimum of £0.10 and a maximum of £500. The game has been optimised using HTML5 technology for play on desktop, or mobile/tablet using an Android or iOS.

We recommend you to try Street Fighter II: The World Warrior Slot, an online slot game available at the same supplier as this one.