Demon is a 30 paylines slot from Play'n GO based on the English new wave band.

The band Demon is not one of the more well-known, but they played their part to usher in the new wave of British heavy metal. They did this alongside other famous bands like Def Leppard, Motorhead and Iron Maiden. The band plays on the theme of devil-worship, which is evident in the darker artwork and sound effects. The slot takes place in an underground realm of stone-carved demon statues with animated masses waving pitchforks while cheering at a giant hovering demon, concealed behind the reels. 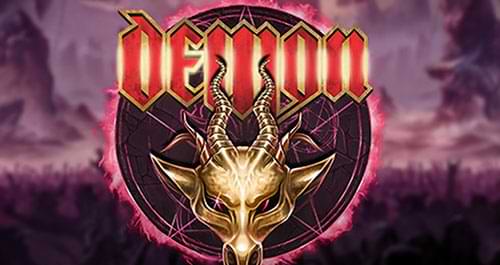 The upper-paying symbols include the lead singer Dave Hill dressed in a cult robe, a crucifix, angel statue, gargoyle and face-removing demon. The lower-paying symbols include five royal flush poker symbols. The game offers a playlist of seven Demon songs which you can choose from, but to listen to 'The Devil Rides Out', you'll need to complete 100 spins first.

We’ve reviewed Honey Rush, the newest online slot machine by the same company. Check it out and see what you think!

A goat's head representing the demon Baphomet is the wild for this slot. It has the power to substitute for any of the other symbols except the Wild Amulets. It forms a payline win of its own with payouts of 16.67x, 3.33x or 1.33x total bet with 5, 4 or 3 symbols. This symbol also plays another role when it appears in the center position of the third reel (center of a pentagram). Here all the symbols of Dave Hill transform into Wild Mask symbols.

This is a very high volatility game with a maximum payout of 5,000x total bet.

With pun intended, Wild Amulets are the second possible wild to appear, but only on the first and fifth reels. If they both appear in combination with a Wild Mask at the center of the third reel, then 11 extra spins are awarded. If the Wild Mask appears at the top or bottom of the third reel in combination with two Amulet Wilds, then 6 extra spins are awarded. In this feature, a random win multiplier is applied to each spin with values of 2x, 3x, 5x or 8x. 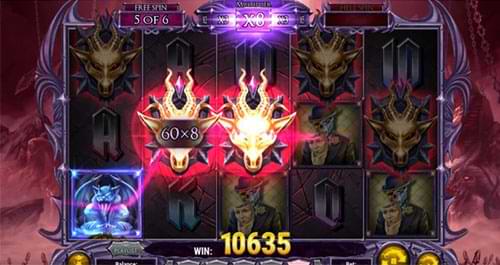 Demon slot was a collaboration between Play'n GO and the band of the same name which gives us access to many pretty good songs from the group. The artwork and sound effects bolster the strong occult/demonic underpinnings of the slot, and the features are quite entertaining. Unfortunately, this very high volatility proved to be too scary - at least with its stingy payouts! Not even the features could salvage what felt like a slot out to take my money. If you want to listen to Demon, then try a streaming service. If you're going to play high volatility, try a different slot like Mega Moolah from Microgaming instead.

The main features are the One Helluva Night Extra Spins and Hell Spins. 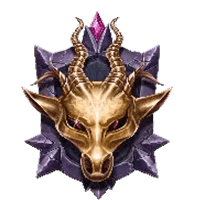 Demon slot has an RTP of 96.51% and can be played with bets starting from £0.30 and going up to £90. It has very high volatility, so be prepared to play with a higher bankroll. Optimized for mobile, tablet and desktop, you can take it anywhere with an Android or iOS device. Find it at one of our recommended casinos today.

Check out the latest slot machine we have reviewed and have a chance to win big with Doom of Egypt!

Players who like Demon also play at :
Technical details
Softwares