From the developers at Quickspin comes the 5-reel and 40 fixed paylines slot Beowulf whose legendary story finds its origins from an old English epic poem. Featuring this Geat hero, this slot offers a chance at up to 100,000x your bet per line!

The hero Beowulf is the reigning payout symbol, followed by the king and queen at the high end.

The middle tier symbols include a Viking ship, golden horn and emerald ring. Rather disappointing with such a rich theme and so many possible symbols is the use of poker suits at the lower tier.

The background is a mix of dark blue and black which feels a little unimaginative.

Still, the epic music will put you in the right frame of mind, as does the thunderous sound of the spinning reels and sound effects. 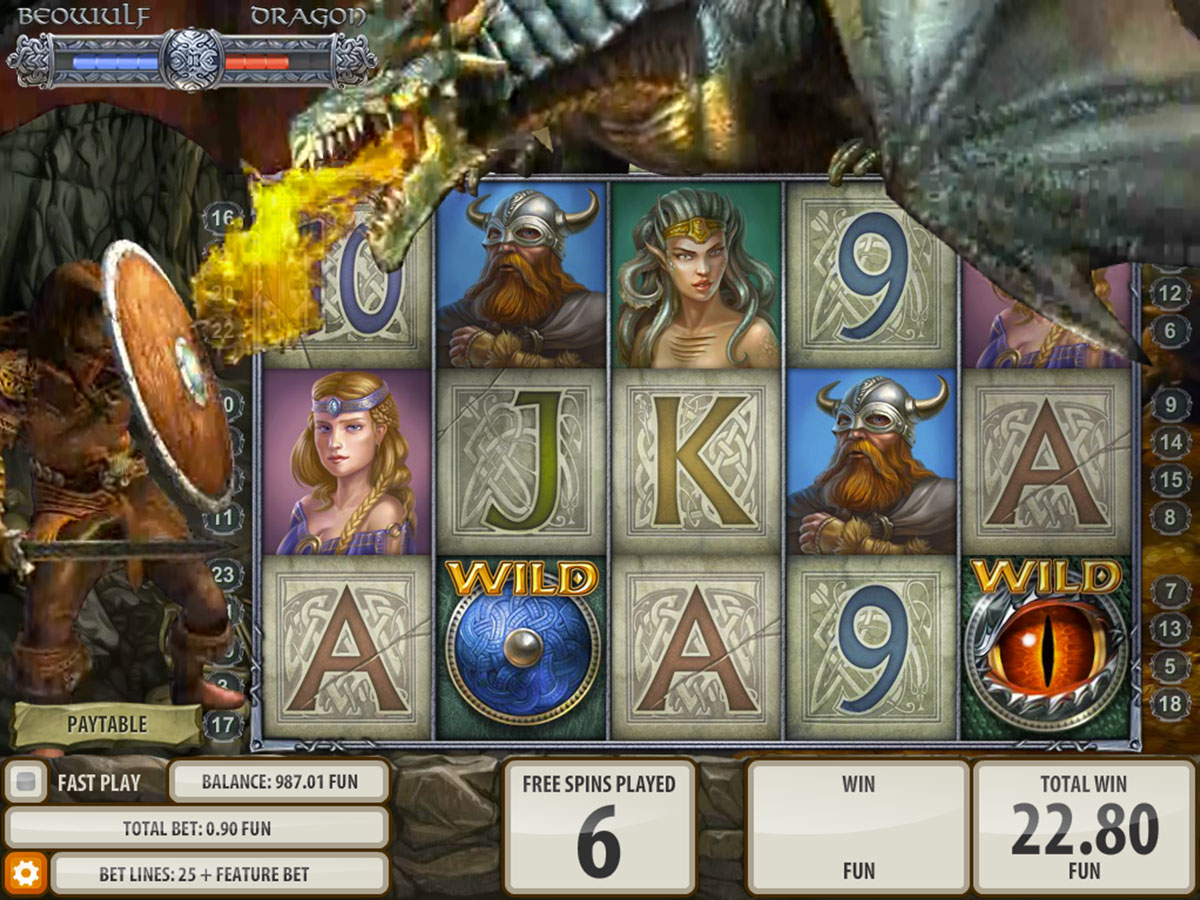 The Beowulf symbols is different from other symbols as it not only pays from left to right but also from right to left and in so doing can reward you with 50x, 500x or 2,500x your bet per line when you land 3, 4 or 5 symbols on a winning payline.

What’s more, the symbol can appear stacked and when the first reel is completely occupied by this symbol then the super respins bonus feature is triggered.

Once triggered the standard reels are replaces by a special one where only blank spaces and Beowulf symbols are present.

Commencing with 3 respins where all Beowulf symbols that land on the spaces are frozen in place until the end of the feature which extends by an extra spin with the addition of more Beowulf symbols.

Your wins are calculated when the feature has ended when your spin fails to reveal any more Beowulf symbols which can be as magnificent as 100,000x your bet per payline.

The shield and swords scatter symbol is what will unlock the free spins feature for you!

To further enhance your gaming experience, you have the wild symbol whose power to substitute for all symbols except the scatter will make your journey even grander!

Looking for more games based on movies, TV shows or books? Odysseus from Playson is the slot for you!

The variance for this slot is low meaning your wins come often, but larger ones coming much less so.

The super respins feature is a great bonus feature that we managed to trigger on several occasions as well as the free spins feature.

If you’ve seen the animated movie, then nostalgic value alone would be a good reason to give this slot a try!

Players who like Beowulf also play at :
Technical details
Softwares